When I was a kid there was a television show called Name That Tune. Two contestants would have a bid off on how many notes they’d need to name a tune.

Contestant A: I can name that tune in seven notes.

Contestant B would think for a moment and then respond: I can name that tune in six notes.

And on the bidding went until one contestant knew they couldn’t go any lower and would say to the other, “Name that tune!”

I’d bet many of you said, “sun go down on your anger.”

This verse from Ephesians has done more to misinform us about anger than inform us. Part of the problem is that we reference it out of context (which I don’t have time to go into now, maybe in another post). And part of the problem is we are drawn to simple solutions, even if they are rather ill fitted for the situation.

This stand-alone verse has resulted a generation that feels guilty about anger and doesn’t really know how to handle it when it comes to complicated matters.  I believe there is a silent anger epidemic in our ranks.

Anger at spouses and kids.

Anger that others have more money.

Anger at the injustice we often feel helpless in the face of.

Anger at not getting what we want out of life.

Anger that husbands have secret sins or don’t spend enough time with the family or us … and we have to put on happy faces.

Anger at God … but often we don’t know how to even go there.

Anger we have no idea what to do with so either we rage or internalize it, allowing anger to eat us from the inside out.

Here is the good news. Anger is a God given gift. It is one of the ways we have been made in his image. God gets angry at injustice. 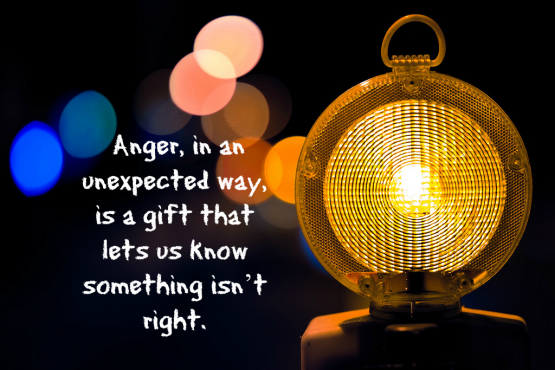 The problem is many of us don’t have separate categories for “Good anger” and “Bad anger.” Instead we’ve lumped all anger as either good/justified or bad/to be avoided at all costs.

This is a simplified distinction, good anger helps us to identify and rally against injustice. It helps us to protect and provide for the least amongst us. It gets us off our behinds and can propel us to action.

And “bad anger” isn’t really the problem either, it’s how we handle and express anger that we often sin. By saying things we shouldn’t, by screaming and scaring people, by throwing or shoving or some other physical response to a situation. Or by icing people out. Or denying we are angry. We have a variety of ways of expressing anger.

Thankfully, God has not left us in this angry state without resources or ways to grow. Think of anger like a warning light on a car dashboard. The light points to a problem (or a potential one) and lets us know we need to address it before it becomes a BIG problem. Anger, in an unexpected way, is a gift that lets us know something isn’t right, something can no longer be ignored or left as it is.

Another way to view anger is as a big brother protecting a little sister. Why are we angry? Because it’s powerful. I don’t know about you, but when I’m angry, it’s empowering. There’s a rush. But the truth is anger is often protecting a “weaker” emotion like sadness, betrayal, hurt, being misunderstood, disappointment or envy.

Envy, on her own, is kind of weak and easy to poke holes at. However, when protected by her big brother ANGER, suddenly envy has power. If I see my friends back home who are around the same age as me buying houses and all I own is a bunch of books and some more and more out of fashion clothes, one response is envy. But instead of being able to just sit and be sad and deal with my envy, I might get angry when my agency decides to raise the monthly amount I need to raise and send a group email I regret.

The big brother/little sister analogy has changed my relationship with anger. I have slowly trained myself when I’m angry to take the time to see if I’m angry about a Godly injustice or if my anger is protecting an emotion I’d rather not deal with. If it’s the later, I make myself name what’s the emotion behind my anger and then God and I can deal with it.

Psalm 57 come with the instruction:  To be sung to the tune, “Do Not Destroy.”  Don’t you love that there was such a song! May the same be said about our anger — may we not be destroyed by it!

A helpful place to start if you’d like to read more on anger is Anger: Handling a Powerful Emotion in a Healthy Way by Gary Chapman

Disclosure : Amazon Affiliate links included in this post.  If you click through to Amazon, any purchase you make supports Velvet Ashes.

A form of this first appeared on Velvet Ashes