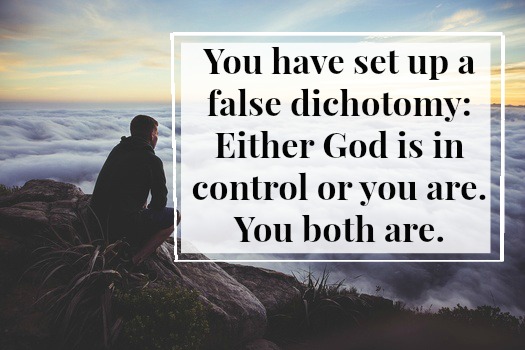 “Control” was the theme of the week at Velvet Ashes and one of the blessings has been to remind me that God is in control. That he did not merely put the world in motion and then step away, leaving us on our own to figure our way through the muck.

As I was thinking about how God is in control and what my life might look like if I had control, I sensed the whisper of the Spirit say, “But it’s not an either/or. You have set up a false dichotomy: Either God is in control or you are. You both are.”

We are part of the Imago Dei—the image of God. In the Garden of Eden, before brokenness, distance, and sin entered the story, Adam and Eve lived being an Image Bearer perfectly. God revealed how my thinking about “control” has been influenced by The Fall. Living, as we do, in Eden Lost, all we have seen and experienced has flavoring from the fall. But the hope of the Gospel is that the Kingdom of God can be here and now—and that also involves how we use control.

Having and handling control rightly is one of the ways we are Image Bearers.

I cannot wait to get to Heaven and ask God if I can see this scene. But until then, we can picture it. God forming animals and bringing them to Adam, dare I say, eager to see what he will call them? Excited to share in this moment with Adam and see what Adam will name the animals.

The Lord God formed from the ground all the wild animals and all the birds of the sky.

Emphasis obviously added. Control starts with God (and I’m going to call this “Capital C” Control). God is the one who makes animals out of the ground! God brought them to Adam to see what he would call them. God did not bring the animals to Adam and tell him what they were.

He brought them to the man to see what he would call them.

Part of being an Image Bearer is having control (“Small C” control).

Look what’s next. The amazing vastness of this control we have been given.

The man chose a name for each one. He gave names to all the livestock, all the birds of the sky, and all the wild animals.

Again, emphasis mine, but the words are God’s. (God and I are sharing Control, control). Adam chose a name for each animal. Each. Not some. Not God saying, “That’s a dumb name” or “Hurry it along.” Adam had control of a task and the way he chose to do it.

This all sounds exciting and fist pumping the air and wow! Then I think about the task.

All the livestock. All, not some. Not just the pigs, chickens, cows, showing my lack of agricultural knowledge.

All the birds of the sky. All, not some. Not just the robin, blue jay, sparrow, and hawk, showing my lack of bird knowledge.

All the wild animals. All, not some. Not just the panda, tiger, and elephant, showing my lack of wild animal knowledge.

We are not told in the text how many animals there are or how much time it took, and this was before The Fall so tedium hadn’t entered the picture yet. But it is a bit overwhelming how much God is willing to share control with Adam.

As an Image Bearer, God has chosen to share limited control with us. I forget this. More often the narrative is to focus on how God is in control and I had to accept how much is out of my control; I forget how much is in my control.

Even typing this I feel uncomfortable because I’m more familiar thinking of my lack of control. Let’s talk for just a moment about how life in the messy middle might be informing our relationship with control. We all know people who:

All of these are true. And even in Eden, control didn’t mean you get to do what you want at all times.

Today, I’d like for us, like Adam, to name what we do have control over. Where God has formed something and then offered you or your family or your team to have control. While we can’t list all that God has let us control, let’s see how many comments we can get!

A version of this appeared on Velvet Ashes