If I’m not careful, you’ll miss the point of this post. Not because you are dumb, but because I mistold it. This is about what a homeless man taught me, not what I had to offer him. 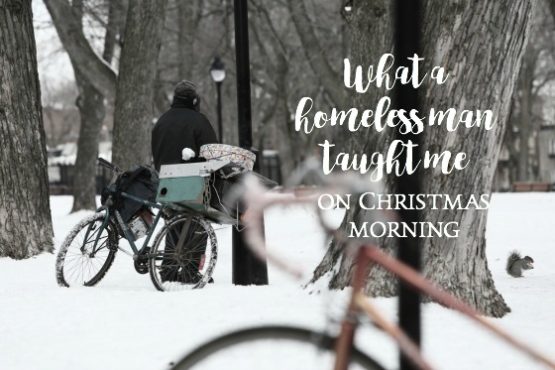 This starts with my sister Elizabeth who several years ago got the idea to look for homeless people on Christmas morning and bring them a hot breakfast and a hot cup of coffee. She rallied her family and they bought or made:

The family loads up at 7 a.m. on Christmas morning and drives downtown — praying on the way. Each girl has a particular role to play in the assembling of the bags as they get ready to hand them out while they drive around.

I do not tell you all of this so you will think or say, “Gosh, that’s so amazing what THEY do.” I go into such detail so you will maybe get an idea of something you can do. Maybe your gig isn’t the homeless or breakfast, no worries. But the Holy Spirit is so creative and in love with people, I believe you will get a stirring in your soul as your read this. Just start with small steps.

I went with them this Christmas. Want to fight consumerism? Look people in the eye who sit in a camp in the middle to the city as your exchange names, and you will be humbled by all you have. Gently ask a person in a sleeping bag in a door step if they would like breakfast and some coffee. Pray with a woman in a wheel chair who is banned for 60 days from the bus station. Your true blessing on Christmas isn’t in the presents, it is in the love and presence of people. It is in the building of memories. It is in the being together. It’s in remembering this is exactly why Christ came. We still need Him today.

Most of the time we were all in the vehicle manning our stations with Elizabeth jumping out and engaging people. Exchanging names. Wishing them Merry Christmas and offering then food and beverage. As we neared the end, she was taking coffee to a man as another man we wanted to offer breakfast heading another way. Niece #2 and I hopped out of the vehicle and took off after him with a breakfast burrito.

He was fast. Not because he was running from us, just because . . . he was a very fast walker! Across the street, around the corner. “Sir,” I yelled, “Merry Christmas, would you like some breakfast?” He didn’t hear me. We picked up our pace, following him on a sidewalk cutting off to the right going under a bridge. Just as he passed a small retaining wall we caught his attention and nearly scared another man living behind the wall.

The first man wanted the burrito but no coffee and cheerfully went on his way. To the second man we asked if he would like a breakfast burrito and coffee and that we’d need about five minutes to go and get it and return, but we would return. He lit up and thought that would be nice so as we took off and he kept hanging his laundry on the retaining wall.

Elizabeth joined us and the three of us returned with food and beverage in hand. (At this point we had run out of sugar and creamer packets, so Elizabeth carried a carton of half-and-half and tupperware of sugar. Again, I share all of this, so you can get an idea of what can be done). Donald startled when we rounded the corner. Man, scarring him twice? Not cool. Such is life, eh?!

Yes, he’d take cream and four spoons of sugar. Then he asked, “Are you praying people?”

We are. Would you pray for me? Of course. Elizabeth and I held Donald’s hands as #2 held the cream and sugar. Elizabeth prayed for him and then he asked if he could pray too. Please do!

. Donald was my teacher on Christmas morning as I entered another classroom in the School of Prayer. If I was homeless I think I’d pray for shelter, safety, warmth. I’d probably pray to be left alone by the police. I think I’d pray to be fed on a consistent basis. I might even pray to have more than a retaining wall to hang my clothes.

That sounds about right doesn’t it? Not that Jesus doesn’t care about our homes (I do believe they matter to him) or our safety (ditto on mattering), but maybe my priorities can be off.

Maybe instead of putting shelter, safety, and health so high on my list of focus—both in prayer and life in general—Jesus wants me to be mildly more interested in my character and the fruit of the spirit.

Isn’t this part of the mystery and the marvel of Christ at work? We serve and often end up being fed.