I am excited today that Ellie Ava will be our first Help Us Understand interview, and help us she does! These interviews will be a bit longer than my normal posts, but these are complex subjects and worthy of creating a bit more space.

Ellie, we are grateful you are here today. Thank you for trusting us enough to listen to you and for the ways you will help us understand those who are spiritual better. 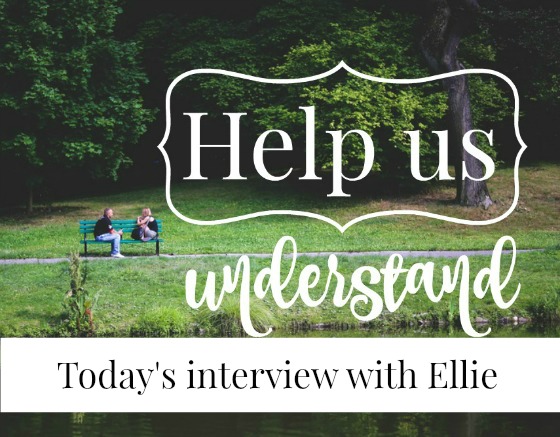 What does “spirituality” mean to you? If you practice some form of spirituality, what does that look like?

This is something very much in progress for me. I am still detoxing from a lot of the spirituality I grew up with, so I’m being very careful in how I integrate new approaches. But there are a few things I practice.

When grief presses in, I like to sit on the floor and light a candle. I loved this tradition in the Anglican church. I’m not totally sure what it symbolizes for me now, but it’s a chance to stop and sit in the pain and allow it space to breathe. I always heard that part of the point of prayer is to change our hearts, not God’s. I think this space does the same thing for me now. I try to let myself be changed by the grief. I let myself be made softer and more compassionate by it. I remind myself that I am strong enough to bear it and I don’t have to hide from it. It won’t break me.

I have also started practicing radical acceptance. I acknowledge that the world is the way it is, as much as it pains me, and I recenter and find myself within that. I am working on accepting my full humanity and believing that I am an acceptable human being after 25 years of thinking I am flawed and broken and disgusting and only passable because of an external sacrifice. Accepting my humanity and that of others has become a spiritual experience for me.

Meditation helps with this, because it reminds me that I exist apart from all the pressures and pulls and structures and society around me. There is a “me” at the bottom of all that, and she has really good things to say and to contribute to the world.

What has been your experience with Christians and the church?

I feel like I need to establish my “church girl” chops so I can validate my journey, but I’m choosing not to, in the somewhat optimistic hope that people will simply listen and allow my experiences to be my own instead of interpreting them for me or finding “the” reason things happened the way they did J

I had a pretty isolated, fundamentalist upbringing, centered around conservative politics and independent churches. “Literal” readings of scripture abounded, so there wasn’t room for other views or interpretations. We supposedly believed in grace and faith, not legalism and works, but in practice, if you didn’t behave according to the “code,” you were said to be out of God’s favor or at least not living “God’s best.” To prevent this, strict, authoritarian parenting and avoidance of worldly things was the norm.

I followed this up with years of homeschool speech and debate, which focused on apologetics and defenses of faith with a side of shaming and purity culture. Through all of this, I loved Jesus and the church and wanted nothing more than to share that love and win people to Christ. What I didn’t realize was that I had been taught to bury my identity, my voice, and my feelings in order to conform to what the church taught me was holiness instead of being allowed to flourish as a flawed, beautiful human being.

After all that, I went to college overseas and got a refreshing dose of modern Anglicanism. I loved it – the history, the tradition, the spirituality, the awareness of other cultures and the issues facing the world. It was so open compared to the closed-off fundamentalism that I grew up in. It was a truly wonderful experience. So my faith grew and expanded and my picture of God blew wide open as I realized people in other parts of the world have been practicing faith far longer than we have and they have all sorts of different opinions on things. Did you know that a huge theological debate in Africa is whether dowries are biblical? I started to separate what was cultural from what was actually biblical and brought a lot of that awareness back to family and organizations back home.

I moved to Germany after I graduated, and that was when things started to fall apart for me. I worked in a lab under a boss who was emotionally abusive, and I attended a church plant run by a Texan family that was very similar to the non-denominational churches I grew up in. After four years of attending an intellectual, culturally aware church in England for four years, it was hard to go back to the anti-intellectualism, lack of understanding, and “the Bible alone is enough” worldview – especially when they meant “the Bible as interpreted by Americans is enough.” I had already seen that faith was much broader than that and knew if there was a God, he had to be much bigger than that to encompass all the things I had seen and all the beautiful people and cultures of the world.

Still, I did my best to hold on to faith as my health and emotional well-being disintegrated at work. I prayed and read my bible and listened to Christian music and sermons and prayed in tongues for my boss to start treating us better, and he didn’t. Eventually, I came home and collapsed on my parents’ couch for six months. I was diagnosed with POTS, related to Chronic Fatigue Syndrome, and my energy levels are still pretty limited.

For years after that, I got therapy and explored other types of Christianity. I learned about hermeneutics and tried to make sense of things. I started to realize how much trauma I had experienced in church growing up – how much of my sense of self had been stripped away by doctrine and homeschool Christian culture and authoritarian parenting and spanking and strict fundamentalism and isolation. I realized how a lot of that had set me up for the emotional abuse by my boss, even if it wasn’t directly abusive. I had internalized the idea that abuse and suffering and sacrifice were what made us holy, and I thought I had given up before “God could bring the victory,” making me a spiritual failure. And yet, I wanted it all to be true because it made me feel safe and certain of the way the world worked.

Eventually, I realized that the sense of safety in my home evangelical community was only possible because they excluded people who were different or who threatened their idea of how the world worked – including people who didn’t “get the victory” in whatever their struggle was. There was no room for beauty in a messy, flawed world, only in God’s perfection, and that led people to overlook, write off, and even worsen the struggles of everyday people, especially marginalized ones. Their “toolkit” for facing the world only worked in very limited circumstances, and they fought tooth and nail to preserve those limited circumstances so they didn’t have to change their beliefs. Once I saw that, I couldn’t be part of it anymore. That safety and certainty comes at too high a price for me now.

There are forms of faith that don’t exclude other views, and those can be really wonderful. But because so much of my upbringing was focused on believing the right things out of fear, I decided to intentionally let go of belief for a while. I think the things that are real and good and healthy will come back to me on their own, organically. But I still experience a lot of fear and guilt about religion, and as long as that’s my primary motivator, I don’t think I can have a healthy or authentic relationship with faith.

I had a dream a while back that I was in a sort of multi-faith education, worship, and community center. It was in a big warehouse, and every faith group – including Catholicism, Islam, Judaism, Evangelicalism, Buddhism, Hinduism, and Secularism – had its own room. They were beautifully decorated with art, fabric, meditative stations, relics, and books, and there were no doors between them, so when each group would have services, the other groups could hear them praying, talking, and singing. You could wander freely between them and engage with the people and their history and rituals, learning from each other even while you practiced and shared your own beliefs. I would love to build that space.

If I were to join an existing congregation somewhere, it would be important to me that people be viewed first as human beings and second as members of the community. I would also want to see compassion and understanding of the complexities of the world and thoughtful, careful analysis of current issues. I would need it to be low-key, and I absolutely need the leadership to focus on peoples’ well-being and proactively do their best to prevent abuse in all forms. I would want to see scripture and theology evaluated and practiced with a hermeneutic of love and acceptance above all.

What are some of the unanswered/difficult questions that you continue to wrestle with?

Is love enough? It’s about the only thing I believe in right now, but there’s so much darkness sometimes. I don’t know if it’s enough to win in the end. But I feel like it’s worth holding on to, because it’s the best chance we have to build something different. It’s the highest good I’ve seen and experienced in my life.

What do you wish Christians and the church understood?

That we are all people with valid journeys and something to offer. It seems really basic, but I was brought up thinking that Christians have this mysterious “key to life” that no one else has, so no one else is worth listening to. I think religion does offer a lot of tools and vocabulary to deal with the complexities of life, but so do philosophy, science, history, and the lived experiences of our friends and neighbors. Sometimes Christians unintentionally use language that makes Christianity the “default” setting and then try to find a way to include me in that, instead of acknowledging that I have a full identity and worldview on my own. I’m not ex-Christian or post-Christian, I’m Ellie, and I’m complicated :)

Ellie, after hearing your story, I am moved to respond. But in the spirit of listening, I simply say thank you. Your words will not lightly be brushed off of me or others who read this. We appreciate you helping us understand. Thank you.

(In the spirit of listening, comments have been turned off.)