Where does the story of a book actually begin? Does Love, Amy’s story start in 1992 when I wrote my first newsletter, raising funds for a summer in China? Or did she start in 1995, when I moved to China full-time and started writing monthly letters? Or did the book begin last May when I decided the time had come to put the letters into a book form? Or, final option, when I realized in November that Love, Amy would not be all my years on the field, instead, the book needed to end after nine years instead of containing all my years in China?

On this we can agree: Love, Amy did begin at some point. Because every book is different, her “coming to life” story is unlike Looming Transitions. I now see how “easy” Looming Transitions was and why she was a perfect first book for me. You might recall that LT is based on a seminar I designed and presented about six years in a row. Having taught on the content and gathered examples for years, she was a familiar friend. We went way back and were comfortable with each other. Though she contained bits of my story, she didn’t demand too much of me personally.

She let me sleep at night and wasn’t an unruly child. She gave me face and played nice with others. If this is what book writing is like, sign me up!

No scratch that, I assumed that because Love, Amy was mostly a combining of already written newsletters, she was practically written. The angels laughed and put their arms around me, knowing that I would need to be held in the ways of the well-meaning, delusional fools who walk head long into the ocean and wonder how long until they get to the other side.

So, blissfully I pulled out the notebook that held my newsletters. 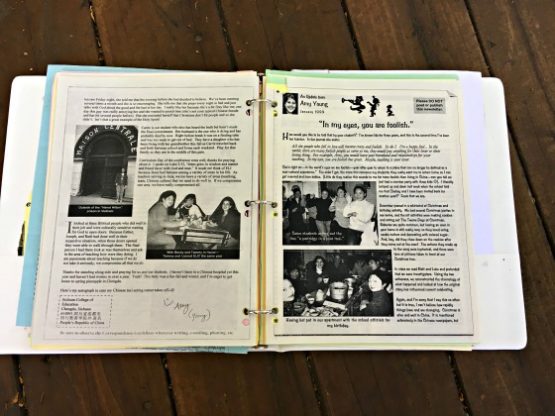 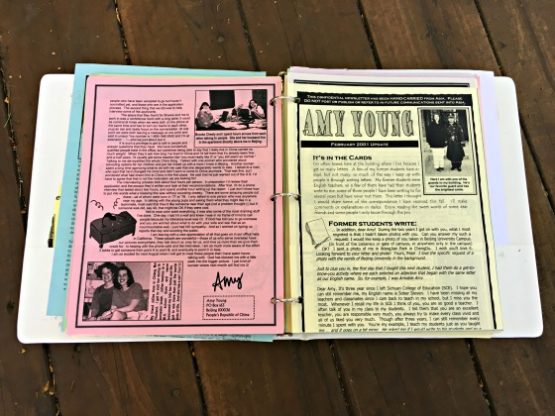 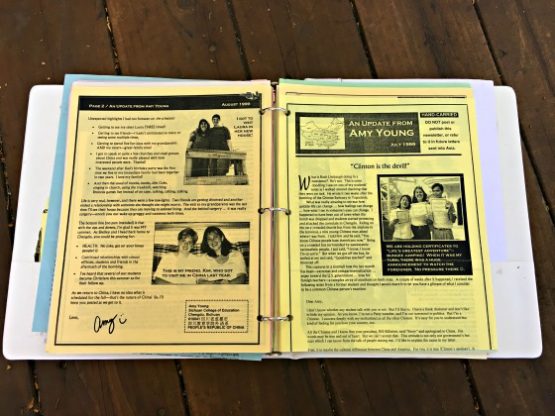 Okay, first problem, until maybe year six I had no digital copy of any letter. And starting in year six, I had about half of the letters in digital form. Not one year did I have a complete set of digital copies.

What’s that you say? I can’t hear you from the shoreline, asking if that might not be a sign of the choppy waters to come. Nope, I’ve got my back to you and am excited to learn about a dictation service — Rev.com. I love Rev.com. What it turns out I don’t love so much is the process of dictation :).

Starting last May, but really taking off last June, I dictated two or three letters a day. Every day I recorded the letters in a voice memo on my phone, emailed the memo to myself, uploaded it to Rev.com, paid based on how long the recording was, gave a few specific instructions (like “It is ‘Erin’ not ‘Aaron.'” Or “You spell it ‘Chengdu.'”) and waited. Often within a few short hours the transcript came back and I would read and clean up transcription errors. (Side note: cleaning up transcription errors is not my strong point.)

It was through this process that I came to see, “Wait, these aren’t just newsletters, Amy, you kind of wrote this like an unfolding saga. This is more like a memoir than I realized.”

I got excited. Again.

So, I needed an introduction, conclusion, and short articles for those who write newsletters. I contacted my friend Davita who works with many who write newsletters. Would she share from her experience? She would! Yay! Street cred that Love, Amy wouldn’t just have my ideas, but someone who has read hundreds and hundreds of letters. The intro wasn’t hard to write, but the conclusion?!

The angels saw me flailing around in the water and kindly helped me focus by asking one question. “Amy, why did you write this book? What do you want the read to know when he is finished? What is the message of this book?” I pointed out that they had asked three questions and they gently reminded me I wasn’t really in a good position to split hairs. Did I want to get to the other side or not?

About this time, this was last November, I started freaking out about the cover. Why not? The book wasn’t even done, so instead of focusing on the problem before me (writing the conclusion), I decided to add to my angst by wondering if I could ever, ever, ever love another cover as much I had loved Looming Transitions. Hitting it out of the book cover ballpark, instead of feeling confident when I stepped up to the plate, I was pretty sure I had used up all of my “luck.”

But still I fretted, would my next cover be ugly? Would I love her less? LT’s cover designer was busy so I asked my friend Lynn from Writers on the Rock who she used. She told me about Vanessa in England. I emailed Vanessa and assumed (notice a theme?!) that the process would be long based on the process for Looming Transitions. Within just a few days she emailed four or five potential options.

What?! I wasn’t emotionally prepared for this! I needed time to love another cover. I had only contacted her to “get the ball rolling,” not to have it thrown at me like we were playing dodge ball. I’m pretty sure Vanessa wondered if I was for real, because she asked how many pages the book was and when it was to be published. “Um, it hasn’t even been edited yet.”

But the front cover was done and paid for and I highly recommend Vanessa to anyone.

With the cover in mind, I finished the conclusion and got a draft to my incredibly talented editor Deb Hall. The letters were finally going to be read by someone who had never read them. Up to this point, those who knew about the book had read my letters and thought it was a “great idea.”

What made this a challenge was that my newsletters often contained pictures and in the draft I got to Deb, contained this tension. What do you do with writing that relies heavily on images but you will use no images? You edit, edit, edit, and work on creating a smooth reading experience.

Deb and I wrestled with how much I grew as a writer. I was committed to showing the process of development, even if it cost me in reviews. It was obvious that I went through phases—hello year seven and eight, my subtitle phase—and the first few years have no newsletter titles. How much to alter? How much to leave as is? Where is the “this is supposed to be easy” button?!

And then it came time for Andy Bruner to take a word doc that was nearly 100K words long and make it look amazing. He did it. I did not make it easy for him. Love, Amy contains chapters. There are letters within chapters. Sometimes letters have subtitles. Some letters have titles. There are short articles. There are both footnotes and endnotes (because I love notes! I love them!). But he is a saint and a book wizard and anything beautiful in the book is because of Andy.

This is the sexy world of editing, two complete versions and two proof copies: 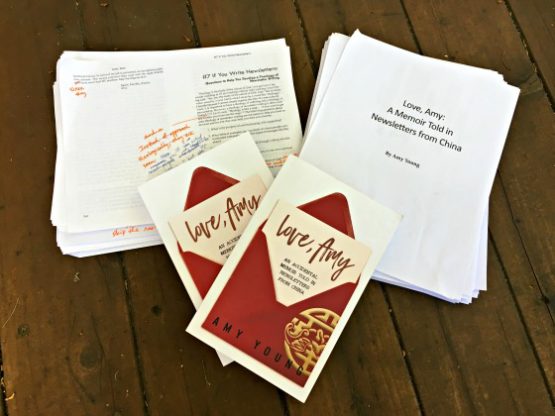 Finally, Love, Amy was done. I got it to those who had agreed to read it ahead of time and then held my breathe and felt nauseous at the same time. Secretly I wondered if I was asking too much of a book: be both a memoir and an infuser-of-newsletter-hope. But for me, I couldn’t do one without the other.

As I stumble out of the water, exhausted but proud, I have learned so much from writing this book. If Looming Transitions was an “easy” first book, Love, Amy is the second child I was too ignorant to know to be scared of and love her all the more for it.

These letters were not written in isolation. Nor was the book! Thank you for caring about the process, for asking questions, writing reviews, and cheering me on.

P.S. I want you to be the first to know that Looming Transitions (Kindle) will be on sale for $.99 tomorrow. The winner of Love, Amy has been notified. xxoo