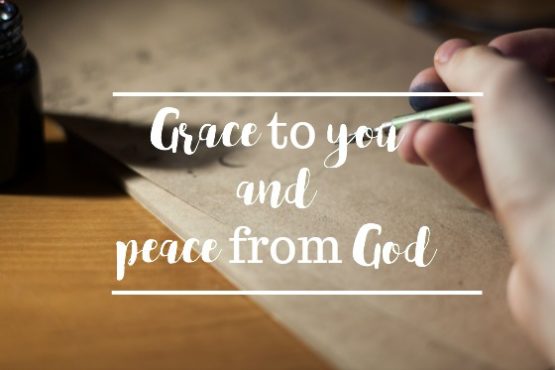 We had a couple of days to kill after a conference ended  and before we needed to head back home—me to Beijing, and my friend Sherri to Hefei, Anhui, China—and had decided to spend it reading by the hotel pool.

I tend to be one of those readers that has several books going at once and jumps around in my reading.  Now, don’t think me overly spiritual, but I pulled out my bible to get a bit of a head start reviewing Revelation since my small group was going to study it. Seeing as Revelation is near one of my favorite books, I got distracted and read Philemon first.

“Grace to you and peace from God.” Familiar enough. So familiar I missed it. Until I read a variation in Revelation.

That night at dinner I struck up the stimulating dinner conversation on the phrase grace to you and peace from God with particular interest in the prepositions to and from, emphasizing them like that as I spoke . Yes, I even pulled out my bible and started flipping to different books wondering on the variations of the greeting.

Is it any surprise Sherri switched the subject to zombies?

Problem is, I have as much interest in zombies as she does in Pauline greetings. We ended up having the most bizarre, yet satisfying conversation in which I talked about prepositions, greetings, and the frequency in scripture and Sherri talked about zombies.

I don’t come from a tradition that “passes the peace” and though I’d read and studied many of Paul’s letters, I tend to skip over the introduction to get to the meatier stuff, viewing them more as a perfunctory version of “Dear Grandma and Grandpa, how are you? I’m fine.”

I’m ashamed to admit that this phrase has almost become like the teacher in Charlie Brown, “Wanh, wanh, wanh,wuh-wahn, wahn.”

Appearing 18 times in the New Testament, in one form or another, it’s easy to tune it out, rushing on to the good stuff. Turns out, it is the good stuff. The most common rendition is Grace and peace to you from God our Father and the Lord Jesus Christ. The simplest is in 1 Thessalonians and simply Grace and peace to you. To Timothy, Paul includes “mercy” and Peter in his two letters adds “abundance,” reminding me that they too lived real lives with annoying people, financial pressures, and their own failings.

Paul, in his “I will not play one side against the other and we have got to figure this out. Like NOW” incorporates both Greek/gentile culture (grace) and Hebrew (peace). He refuses to use a separate greeting to each group, and enriches the tradition with a uniting and expanded greeting: both groups, all people really, need grace and peace.

I assumed this is the peace that passes all understanding and lands on us from God allowing us to be zombie-like in our interactions with people. Tra-la-la I can put up with you because I’m in my happy place. Maybe Sherri and I weren’t as far off in our conversation as it appeared.

Simply put, no. It’s not a zombie like attribute to be able to deal with those we encounter, be it friends, family members, foes, or strangers. Ours is a God not of escape, but of engagement.

Since that initial conversation I’ve researched and mulled over grace and peace. The order is significant. Grace and then peace. Grace given by God so that as we interact with one another, it’s not based on our own merit or goodness (Whew! Because if you’re anything like me, we’d be playing Russian roulette with what might come out me when left to my own). But if we leave it at grace, it’s easy to slip into the focus being on ourselves and experiences; adding “peace” brings the relational aspect into the mix as well.

Grace from God so that I can have peaceful interactions with others, with creation, with my possessions. Grace for the days my fuse is short or the internet is slow or someone is sick or someone says something annoying or doesn’t want to talk about what I want to talk about at dinner, wink. Peace in my response to that which God has invited me into.

Almost a year and half have passed since the grace, peace, and zombie’s dinner. Like a good zombie waking from the dead, this phrase is now alive for me, no longer a phrase to skim past, it bounces around in my soul and off my lips.

This post first appeared on Micha Boyett’s “One phrase” series. Love, Amy is a series of letters. While I”m no Paul in my letter writing ability, I am a fan of receiving letters.