How’s your June going? Hard to believe that the longest day of the year was yesterday. Say what?

I know. I’m feeling a bit random these days, so here are three short random updates:

1. This week I updated the emails that are sent if someone signs up to receive these blog posts or the occasional letters. I have no idea why, but after d-r-a-g-g-i-n-g my heels on the project, it ended up being fun and I’m proud of myself. You can see the first one here.

2. I hurt my hip over a week ago at the gym. My first sports injury! I’m healing and will return to the risky sport of Zumba, but until then I have been shocked by how much you do NOT get done even when handed supposed “extra time.” Staring into space takes a lot more time than you might think. Sigh, no, I haven’t started my “penalty book” for the Summer Reading Challenge. I will, people, I will!

3. Given my sports injury, preaching the last two Sundays, and having fun playing around with MailChimp sign-up emails (I wrote five), the post I’m working on for today isn’t ready. So, below is what is something  I wrote for Velvet Ashes this week.  The theme this week is alien (how timely!) and tied it into my sermon topic on belonging.

Have you ever had a sports injury? I’m mostly kidding, but also kinda not! Would be curious to hear.
Happy long days of sunshine, 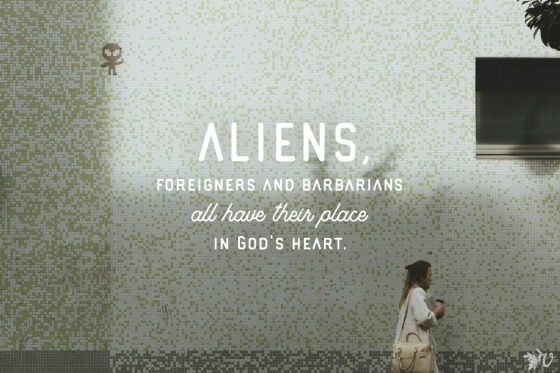 Language can be tricky and fluid. When I was a Resident Assistant in college, we were told to call residents from other countries “international students” instead of “foreign students.” International sounded inclusive and welcoming, it was explained, unlike foreign.

I could see the point.

Then I moved to China, a country whose very name in Chinese means “The Middle of the World,” with Chinese being “insiders” and the entire rest of the globe being “outsiders.” Apparently taking the feelings of the world into account was not a high priority.

In those early days, it caught me off guard when I was asked to stand in the alien line or stay in the barbarian guesthouse. While alien and barbarian and outsider can be legitimate translations of “foreigner,” they point to a more profound construct: who belongs.

As cross-cultural workers, it can be confusing to figure out where we belong. Some of you serve in lands that gladly would let you switch citizenship; others live in countries that will allow you in and out on tourist visas for years without question; while still others have to have an apparent and obvious contribution you offer to a country, and even then, they may ask you to leave at any moment.

We are in the middle of a two-sided coin when it comes to belonging. One side labeled “alien,” the other “citizen.” Where does God say we belong? Here is the beautiful mystery of the Bible: we see both aliens and nations woven in. As I have worked on this post and next week’s Grove, I feel the tension of the “right” answer is that we are citizens of heaven. And it is true, we are. But God also seems taken with the here and now of this world. Instead of shifting to auto-pilot and just waiting for the ultimate stamp in my passport, we are invited to wrestle with belonging and helping others around us to belong.

Today we will look at the side of the coin labeled “alien.” As I consider the entirety of the Bible and what God included about foreigners, I noticed:

1. God has a soft spot for the alien. Again, and again Israel was told to “show your love for the alien, for you were aliens in the land of Egypt.” (Deuteronomy 10:19) Or “Now in case a countryman of yours becomes poor and his means with regard to you falter, then you are to sustain him, like a stranger or a sojourner, that he may live with you.” (Leviticus 25:35)

Aliens and foreigners and barbarians all have their place in God’s heart. You are not merely sent out to be used by God as you struggled with the language, the weather, your project, the hours spent keeping a home. You hold a soft spot in His heart.

2. God gives a face to the alien. In the Bible God does not merely talk about “the foreigners in your midst,” He names them and shares their stories, showing the breadth and depth of being foreign.

—Joseph was foreign through being sold, later his whole family through famine.

—Esther was foreign in what may be the first example of BAM (Business as M). She was in the business of royal service.

—Naomi was foreign through famine, and then widowed and became childless in a foreign land. She returned home bitter, but not alone.

—Ruth was foreign through marriage and then serving her widowed mother-in-law.

—Moses was foreign through adoption, through relocation and political asylum, and leading a people who had a different story than he did.

—Daniel was foreign though captivity.

—Mary, Joseph, and Jesus were foreign for a season, due to political danger.

—Paul was foreign through religious conversion and traveling.

—Barnabas was foreign through traveling.

3. Though foreignness takes on many faces and paths, it always points to a bigger story.“For I was hungry, and you gave Me something to eat; I was thirsty, and you gave Me something to drink; I was a stranger, and you invited Me in.” (Matthew 25:35). Being foreign or alien or a barbarian isn’t the destination, but it can be a path to see God at work in the world. In this verse in Matthew, it was the outsider being shown God’s love and provision.

Paul pointed to the bigger story as the reason for his foreignness when he said, “For this reason I, Paul, the prisoner of Christ Jesus for the sake of you Gentiles” in Ephesians 3:1.

We are aliens, it is true. How does God’s soft spot for and the inclusion of the outside in the Bible spur you on to “work and good deeds?”