The following was written by Laura Young and read by her at our father’s memorial service. She did a great job!

Dad was born in Walsenburg, Colorado in 1939 to Robert and Grace Young.  His sister, Bobbye, was 10 years old when he was born.  Dad’s many years attending the Baptist Missionary Society with his mother as a young boy seemed to help set the stage for his compassionate care-giving and care-taking of many others throughout his life. His mother called him Tommy, he was a sweet, even-tempered child, and he spent hours playing with his cars and trucks. A harbinger of what was to occur many times throughout his life, Dad entered 2nd grade with two broken arms. The first was broken while roller skating and the second when he tripped on a leash while walking his dog.  A love of music started early in life, as he learned to play the piano and later the baritone.  He graduated high school as the valedictorian of his class. 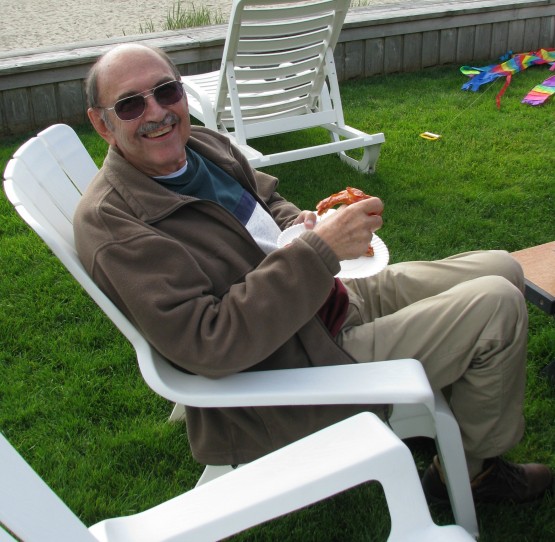 Dad attended the University of Colorado, Boulder for five years. My sisters and I howled when we learned he mailed his laundry home to his mother to wash and return clean to him throughout much of his college career. He pledged Delta Sigma Phi and enjoyed all of the social aspects of belonging to a fraternity during these college years. He completed a degree in engineering, and enjoyed the fact that many years later when Elizabeth attended the same program she had some of the same professors that he had.

After graduating, Dad moved to Denver and began working for Ken R. White Company. It was during this time he met his wife-to-be. Mom’s cousin Nan worked at the same firm and she and her fiancé were in a bowling league with Dad.  During a visit from Michigan, Mom knew she would be attending a bowling banquet with Nan and asked her to fix mom up with someone tall and single for the banquet. Nan fixed mom and dad up for the evening, and one year later they were married.  (Mom asked that it not be shared that they shut the bar down that first night, so let that be our little secret). 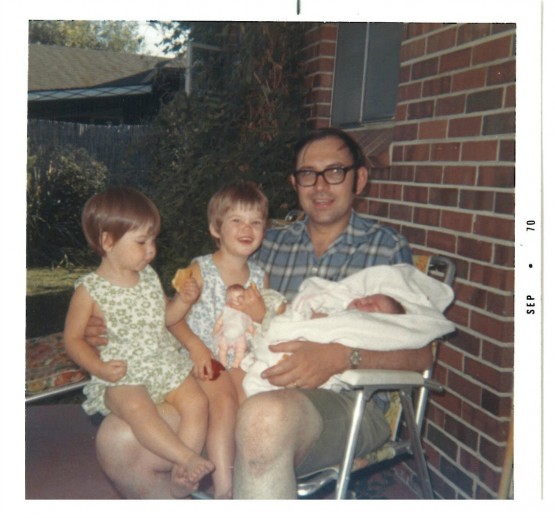 Mom and dad bought a home in East Denver and soon began their family. He was a dedicated, hands-on, very involved father during a time when this was not necessarily the norm. He would “rough-house” with all of his girls, even going so far as having the new-born baby close to the fray so they wouldn’t miss out on anything.  Dad was always proud of the fact that he was in the delivery room and was the first to hold me after I was born. Dad taught us how to throw softballs, how to check the oil and change a tire, how to mow (starting in 3rd grade), how to play cards, he let us “practice driving” by sitting on his lap during road trips, and a favorite treat was being allowed to drive before legal age on the back roads of southern Colorado. He also exposed his family to the wonderful activity of white water rafting. When we girls were still in early elementary school, he became part-owner of a 10-person raft and took the family on many rafting adventures, some safer than others.  One even included jump ropes tied around the raft as handles, which did not provide quite enough protection to prevent one of us girls from being catapulted out of the raft during one particularly hairy rapid.

It was during a rafting trip Dad was thrown from the raft (while going down a kayak shoot, mind you) when he got a huge gash on his knee. It is thought that the antibiotic he received to treat this wound is what resulted in his having Aplastic Anemia. Dad participated in an experimental treatment program in Galvaston, Texas as his only option to treat this disease. He felt God definitely had a hand in his recovery, as it was not clear that he would in fact survive. During this time he received nearly 100 blood and platelets transfusions, and subsequently contracted Hepatitis C, which wasn’t diagnosed until nearly 20 years later.

Throughout his varied career as an engineer, Dad worked as a civil engineer, a structural engineer and a mechanical engineer. He worked on buildings, bridges, drainage projects, industrial baking equipment, and a myriad of other types of projects. At one point he started his own construction company, T.A. Young Construction, which he ran out of the basement of the house. Well known building projects he was involved in include the Federal Reserve Bank in downtown Denver and the USGS Maps Building at the Federal Center in Lakewood. Our  family had the joy of sharing in his passion for engineering, which meant many a drive to look at construction projects of all types, shapes and sizes or checking on detention ponds or drainage projects in the middle of a rain storms to see how they were retaining or draining the water.

Dad was deeply involved with his church community and his love of the Lord was woven into all he did.  He was an Elder at Bear Creek Church, taught various ages of Sunday school, and was involved in two small-group bible studies which resulted in life-long friendships, one of which continues to meet every-other week (aptly named the Road Kill Rowdies).

Throughout his life, Dad increasingly became known as the man made of spun sugar. In addition to the two broken bones he had as a young boy, he broke his ankle playing softball, broke his leg in three places falling on the ice, broke five ribs while snowmobiling with his buddy Joe Brouwer, broke his arm falling on the ice the night before his father-in-law’s funeral, broke his leg at a Denver Nuggets game, broke his hip, and broke one more rib just months before his death.  Mom has joked many a time that not one of her children ever broke a single bone, which is good because her husband more than made up for it. 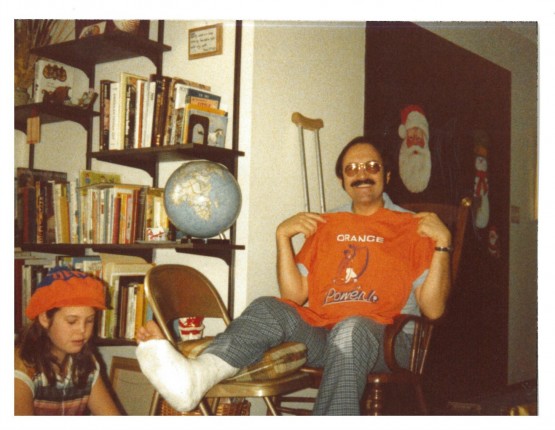 In addition to his family, Dad’s other passion in life was the Broncos, attending almost every home game for 53 years, and having season tickets for 51 of those years. A very poignant memory for Amy and Del is attending both playoff games this year with dad.  Maybe it is not such a bad thing that he was so sleepy and missed most of this year’s Super Bowl. A generous man in spirit, Dad loved sharing his season tickets and many people over the years benefited from his being a season ticket holder.  He even let a friend who was originally from Wisconsin attend a game while wearing his cheese head, that is true generosity of spirit.  Dad even had what was dubbed his “Broncos Whistle”, which was loud and shrill and could get his family’s attention in a crowd and over 100 yards away.

Dad also developed other interests throughout his life. One interest was kite flying.  He progressed from one-string to two-string to four string kites, and a favorite place for his kite flying became Cannon Beach, Oregon where he and Mom spent many vacations together as well as several vacations there with the whole family. He also began learning how to make stained glass art. His very first creation was a large rendition of the Spanish Peaks, which turned out beautifully and hangs up at the townhouse. Dad was working on a piece for his sister Bobbye that meant so much to him, but that sadly he wasn’t able to finish. For years Mom and Dad enjoyed attending Denver Symphony performances along with plays and musicals at the Beuhl Theater.  For a number of years, Dad and his dear friend Doug Kulesa went to Denver Nuggets games together.  And after retiring, he became actively involved in Kiwanis and he volunteered over 700 hours for The Action Center (formerly Jeffco Action Center).

One of Dad’s greatest joys in life, next to being a father, was becoming a grandfather.  Being a grandfather allowed expression of his creativity and nurturing in such wonderful ways.  He earned the nicknames Cuddly Shark and Baby Penguin and wore them with pride. He and mom hosted Waffle Parties for the girls and he created a waffle dance to accompany the waffle making, which later led to a corn dog dance and even a macaroni dance. Dad was willing to jump into the silliness that is childhood play. He never hesitated to play games, including food charades, with his granddaughters. Dad’s thoughtfulness and genuine interest in connecting with others came through in his relationships with his granddaughters too (like flying kites and going to the zoo). 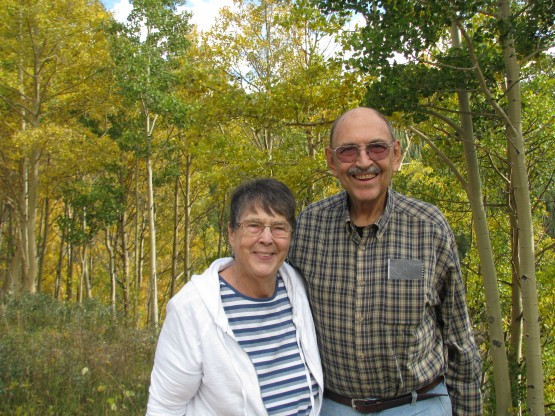 How do you sum up a man that meant so much to so many and had so many varied interests? Dad was an inquisitive, compassionate, thoughtful, witty, loving man who was filled with joy and was quick to share his heart and humor with others. He strove to put others’ needs before his own, to support anyone who needed a helping hand. He was a dedicated husband, father and grandfather, a loving brother and friend. He was an active member in his community. His absence will be acutely felt, as will his love for us all.