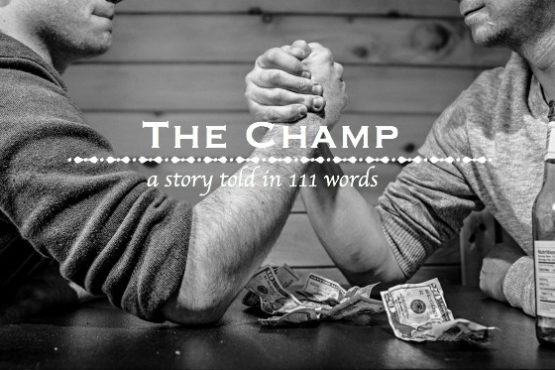 Tuesday was a family birthday. The day before I mentioned a website I learned about called 100 Word Story, where every month hundreds of people submit stories of just 100 words. I thought it would be fun to try and write a story in only 100 words. Why not, right? It’s not a whole novel, after all.

Because the birthday was for an 11 year old, we decided to each write a 111 word story, read them out loud, and then pick a winner.

Only one person balked. She’s eight, so we gave her a pass. Instead she wrote and illustrated an 11 word sentence.

We set the timer for 30 minutes, a hush fell over the room, and off we wrote. “We” involved a grandma, a mom, a dad, an aunt, and three under the age of 16. The only sound was an occasional clarification like, “Is ‘drive-up’ one word or two?”

Time was called and we took turns reading out stories. What was created went beyond any of our imaginations. People, this ended up being an awesome (though maybe a bit geeky) idea.

We had a story about

I didn’t get permission from others, so I share my story, not because it is the best, but to give you a sense of an 111 word story.

The Champ (by Amy Young)

She was an unlikely champion. It had all started on a whim when her friend dared her to sign up for the arm wrestling club at school. At first Anna scoffed, but the offer of a bag of yogurt covered pretzels turned out to be too great a temptation to pass up. During the first club meeting, Anna assumed the fastest way to her beloved pretzels was to challenged the reigning champion, a sixth grader nicknamed The Ox. Anna planted her elbow on the table, waved toward him and said, “Ox, let’s get this over with.” No one paid much attention until a thunk was heard and Ox’s reign was over.

Truly, the stories were amazing and everyone could participate. Today, write a 100 word story and share in the comments just for fun. You can do it, you can. At your next family gathering, it might sound weird, but I can almost promise, magic will happen.