I met my friend Britta at a writer’s conference. I did not know anyone and was lurking near the door, waiting for the organizers to open it so I could slink in and find a seat. Britta has never met a stranger and after ten seconds we had already made a connection.  She was starting a Lenten Curation website called the Meet Me in the Middle Project. Since my blog is The Messy Middle, we bonded over the word “middle.”  Since then, Britta has become a friend and I love her. (I”m also so grateful that she knows basically everything. I learned about Gumroad.com from Britta. She is the birth coach to the Looming Transitions Workbook and the audiobook.)

Everyone needs a Britta in their life.

Britta started the Meet Me in the Middle Project because our world is taken with the “before” and “after” pictures. But much of life happens in the middle . . . the messy middle. Easter is the ultimate after picture. Lent invites (forces?) us to look for God at work in the middle, knowing that the “after” is coming.

This week, I’m over at the Meet Me in the Middle Project sharing about when the middle is l-o-n-g. 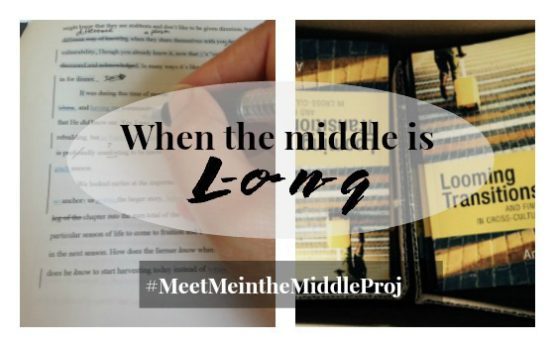 If you met me, you might think I am a people person. And I am.

I just happen to be a task person who also likes people. I love the rush of accomplishing tasks. So, I try to weave into my day a few tasks that are short and concrete just so I can get a hit. Doing a load of laundry. Going to a class at the gym. Writing a blog post. I like to be able to look back at the end of the day and have a sense of accomplishment.

When Britta approached me to write for this series with a before and after picture, I wanted to pick a meaningful example where you would marvel at my deep insights on some ordinary part of our lives. The pictures would have been so amazing you might have been jealous. Just saying.

But what came to mind wasn’t a tidy task; instead, I sensed God say, “Amy, where do you see me meeting you in the middle of long tasks? When the end is not necessarily in sight. You know, the ones where you are in danger of getting lost in the weeds? Or distracted by something that might have more of an immediate pay off.”

Read about when I almost got lost in the weeds.

Have a great weekend. Enjoy lots of basketball :)