This was first posted in early January 2013. Next week I’ll review how the year of Cour_ge has gone and the post after will be my word for 2014.

Around this time two years ago I started hearing people pick a “word for the year.” Words like risk, cadence, or peace.

That’s nice. I thought, but felt if I picked one it would just be to jump on a bandwagon and be all cool. Not the right reason for doing it, so I didn’t.

But in late February 2012 I shared that I had been asked to write on my hand what God had been whispering. And a word, really a phrase, for that season picked me. Renewed Joy.

Fall 2012 I started to hear other whisperings. You are making too many decisions out of fear.

What? Me? At this stage of my life? Isn’t fear a thing of your teens or twenties? Certainly not your forties. But it was true.

What is it that angels say when they show up? Fear not, for I am with you.

Not, don’t be afraid because nothing bad won’t happen. Nor because it will be easy. Nor because you won’t be misunderstood. No, fear not because the great I AM is with you and you won’t be alone in your journey. Courage, dear one, courage. Be courageous because I am with you and fear is not a fruit of my spirit.

As I step into this new year, I wanted an Ebeneezer of sorts, and decided to spell out “courage” with blocks. I don’t envision myself being courageous in the way that courage is needed to climb Mt. Everest, doing grand things; instead, I’m claiming the type of courage that children have, dancing in a leotard that is slightly too small because they have out grown but they don’t care. Courage that is based not on what I have done.

And then a funny thing happened. I rummaged through the blocks and there weren’t enough letters to spell courage. Nice idea, I thought, but not going to work.  How ironic that fear is only four letters and easier to spell than courage. It’s also easier to live.

A day later (I’m not the fastest car on the racetrack), it hit me. I was only missing an ‘a!’ And really, isn’t cour_ge what courage ends up looking like. If we wait until we have all of the letters, so to speak, that isn’t courage, that’s easy. 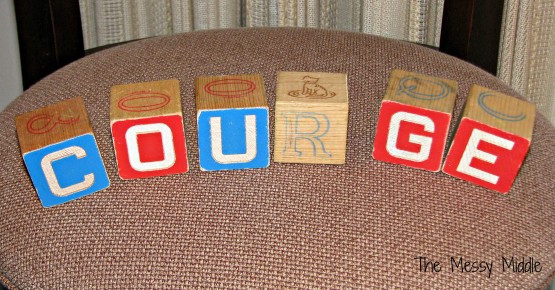 Courage is when you get moving even when you’re not sure where you’re going. Think Abraham.

Courage is when you listen to wise people when you don’t know what to do. Think Esther and Hegai.

Courage is when you step out of the boat in response to a voice you trust. Think Peter.

Courage is when you pack up everything and start all over. Think Ruth.

Courage is when you hear a story that moves you and realize that story is about when you blew it. Think David.

Courage is when an angel shows up and tells you that something so unexpected is going to happen and others around you simply will not get it. Think Mary. Think Joseph.

Courage is not doing something just for the thrill of it or because you’ve been egged on, instead true courage is in response to the one who says, fear not, for I am with you.

This year I am claiming cour_age. If I were the tattooing type, that would be quite the conversation starter, wouldn’t it?! Instead, I’m more the photo-taking type. And this, this picture, is my picture for the year.

Fear not, for I am with you. Cour_ge. Think Amy.