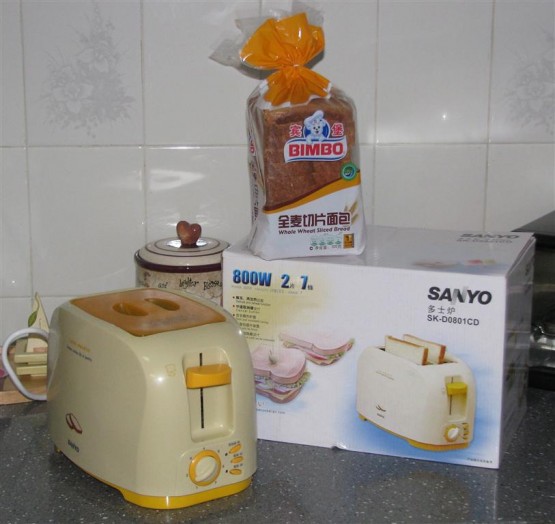 Yesterday I bought a new toaster. I expected to enjoy toast this morning but have been surprised by the memories that have popped up as well!

When I first came to China bread was very hard to come by. Usually we had it only when we baked some in a little toaster oven. No small feat, which is why we didn’t have it all that often. The bread we made was decent, but variety only came in the form of adding different combination of spices to the white flour dough. Trust me, there is only so much you can do with rosemary, oregano, thyme and Italian Spice!

One Friday night about ten of us foreigners rented the hall on the second floor of the guest house I lived in to have a dance party. Now, when you read “hall” try to picture “big empty room with a few small tables and folding chairs.” In good mid-90’s China style, the floor was mopped using only water and a tired mop that just pushed the dirt around, the walls were green on the bottom half and white on the top, and a few exposed light bulbs hung from the ceiling (half of which were burnt out). Rats were known for being on that side of the building because of the restaurant on the first floor. In all fairness, rats were known for being on all sides of that building, but they were not going to stop a good dance party. Not on that night.

In preparation we hauled our boom box and stack of tapes up to the dingy room and got ready to party like it was 1999, a freakishly futuristic time. You can guess the options for entertainment were few if this was how ten young people spent a Friday night, and you would be right.

Often the highlight of any good party is in the snacks. Someone (and this little detail has not popped back up in my memory) had a toaster! Where they got that miracle piece of equipment in a city that didn’t even have bread is a mystery – most likely it was brought in from Hong Kong –but there it was at our dance party. More time was spent in the corner making and eating toast than actually dancing. Because only two pieces could be toasted at a time, there were those waiting for toast, those enjoying toast, and those who wondered how long they needed to wait until their next round of toast. Oh the comments and the joy at eating one of the ultimate comfort foods of western society!

The snack had become the favored guest.

Dance we did! Swirling around and marveling that we had hit the jackpot and were eating actual toast. In the land of rice and spice and chopsticks, for one brief night we had bread and toppings and knives. All because we were eating … toast.

What toast memories did this bring back for you? Please share in the comments and we can have our own toast party!