I learned about HALT-B in some class. You can easily tick it off on your fingers: 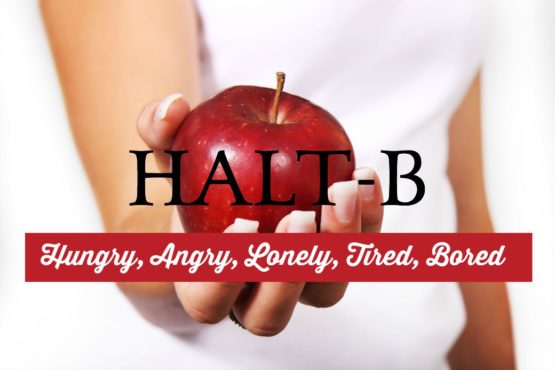 HALT-B stands for things that can lead us to make poor choices. Poor choices can lead to sin and distance and shame and regret. While none of us are at our best when we are hungry-angry-lonely-tired-or-bored, some will be easier to roll with than others.

The granddaddy of them all

When I’m lonely, yeah I’m lonely but I’m not as likely to do something that I will later regret and potentially have to confess. When I’m hungry I can get a bit testy; but the granddaddy of them all is when I’ve had a long day and all I want to do is go to bed. I am not at my most lovely late at night. To say I’m not a night person would be, um, a colossal understatement.

For me, it’s when I’m tired that I’m most likely to say something that I know — usually immediately– I shouldn’t have said. And sadly it happened yet again last week while I was on a business trip. It had been a long day (note to self, pay attention!) and I had returned from a hot-pot banquet with about an hour before bed. A friend at the banquet later emailed me that I looked tired near the end, but she didn’t think anyone but her had noticed. That was the least of my concerns during the meal! As the guest I kept getting served lots of organ meat. My primary concern around the communal hot-pot wasn’t whether they thought I was tired, but whether or not the hosts were noticing how much pig’s stomach I was trying to hide in my dipping sauce!

When I got back to the hotel another co-worker called because she had had a rough day and needed to process it a bit. I like this co-worker and am glad to walk through the up’s and down’s of growth and change. She was sick, not at her best, and at those times can get a bit extreme. Her health will NEVER recover. She’s a burden to everyone she’s ever met. Darth Vader had more friends than she does.

When she gets like this I can usually use mild sarcasm to reflect back to her the absurdity of her statements. Note the use of the word ‘mild.’ Tiredness can take mild and—if I’m not careful, bypass moderate and land on caustic—sarcasm before Princess Leia’s hair comes into it! That evening I was cruising towards caustic when she rightly said, “Wow, you’re a bit sarcastic tonight.”

She was more than a bit generous and gentle! Thankfully, the Helper confirmed with a knife to my heart her admonition and I was able to dial it back to mild. But I know I don’t do well with tired. Late at night I’m good in a crisis, not in a deep conversation and if I’m not on guard what starts off as merely a foolish choice of words can end in blatant, distance causing sin. Now, confession can be made and distance closed. However, how much lighter and freer to be able to go to bed or face the next morning without regret.

How about you? Which are your greatest stumbling blocks?