Princess Anna is brave. Jackie Robinson is brave. William Wallace is brave. Sarah of Sarah, Plain and Tall is brave.

Hmmmm. I am rather informed by Hollywood when it comes to bravery.

This week at Velvet Ashes we’ve been looking at the idea of “brave” in anticipation I asked myself three questions:

1. What do I think brave/bravery means?
2. Where did I get this idea?
3. What does God say about brave and bravery?

If you look at my examples above, most involve the extraordinary and a doing something impressive. Is this how God sees Bravery?

Getting no where fast doing google searches of Hebrew and Greek I contacted my friend Karl Helvig and asked for his help. He sent me a treasure trove of information.

He said, In the Hebrew, ‘Brave’ is rare and, when used in translation, translates a root word that encompasses a rather wide semantic range. {OK, so I’ m feeling better about not immediately have verses jump to mind!}

– The semantic range does seem to conflate our senses of bravery and courage
– contexts of battle, fighting, and quarrelsomeness all come up. 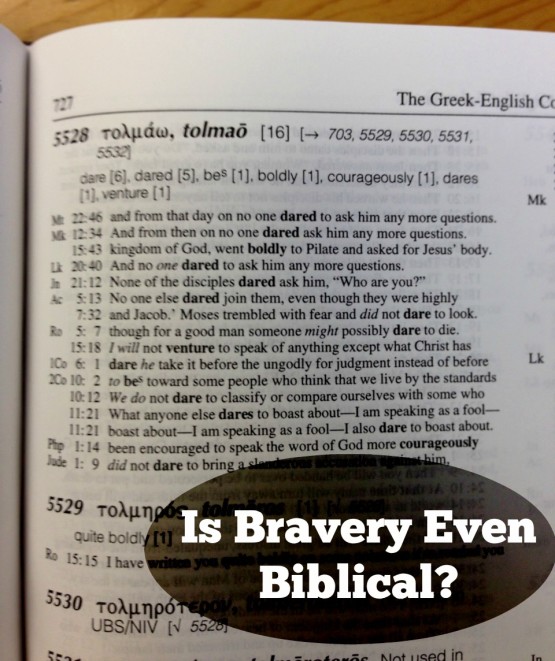 “Brave” shows up 19 times in the OT in the NIV, but only a handful of times in other translations and often in the context of battle, fighting, and quarrelsomeness. There are no appearances of “Brave” in the NT in the NIV, ESV, NRSV, or NASB.

But if we look for “Courage” the NIV has 8 NT uses, NASB has 16 NT uses, NRSV 7 NT uses, and ESV has 6 NT uses. For more information of what my friend shared, read here. But suffice it to say, there is overlap in words and concepts and though the OT and NT may not use the word “Brave” it is not foreign to us.

Greek words are translated as “Courage.”

tolmao: verb, to dare, endure, or submit; endure, undergo; in the infinitive form: to have the courage, hardihood, effrontery, cruelty, or the grace, patience, to do a thing in spite of any natural feeling, dare, or bring oneself, to do.

tharreo:  be full of courage, act boldly, be confident, have confidence in, make bold, venture

parresia: openness, frankness; boldness, confidence, assurance; used sometimes to refer specifically to events made in public (as in Acts 4:13)

And now for the gem from the research. Karl wrote, “I saw one intriguing comment deep in the biggest, fattest lexicon entry on tolmao, it said that to act with courage meant to follow a particular course of action in spite of any natural feelings.

That implies that we as humans have all sorts of natural feelings that regularly direct us NOT to do certain thing, esp. good things, esp, things for the benefit of others.  Courage, therefore, is to overcome the inner self that would prevent (fear, hesitation, insecurity, etc…) good actions.” 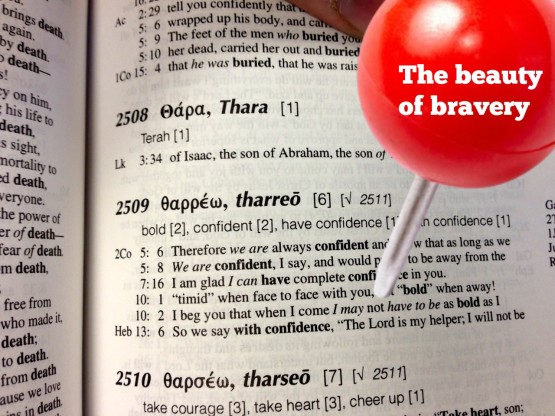 Final Thoughts on Bravery in the NT:
It looks like, at it’s root, courage is the english word that most accurately captures the root Greek and Hebrew meanings.  However, there is clear overlap in their semantic ranges, so that could simply be a matter of modern vernacular and usage.

If I were to attempt a succinct summary of the etymological foundation upon which stands out modern use of bravery/courage, {Can you see why I knew he’d help me understand what the Bible says about bravery?} it would be this: courage is the act of experiencing a generally internal fear, hesitation, disinclination toward a certain act, then choosing to perform that act inspite of the internal hinderances.

This is referred to and experienced most graphically and (historically speaking)} most commonly on the field of battle as the internal hesitation is clearly linked to an external danger to one’s life.

If I were to contrast this root meaning with some modern usage, I would note most significantly that modern usage seems to emphasize that bravery is what happens when one does not have internal fears, or it is an indication of being stronger or more capable somehow.  This, however, does not seem to square with the historical picture as the historical picture seems to embrace the reality of the internal turmoil, courage is acting in spite of that .  There is nothing negative or derogatory about having that internal struggle, having the struggle may even be part of the beauty of courage.

Hope my thoughts have been helpful, its been fun! Karl

Ah, I can see why bravery is most commonly packaged in a story, be it a movie or a book! And that we have gotten off a bit.  I love that last line: Having the struggle may even be part of the beauty of courage.

Karl emailed me four or five times in the last week and every time emphasized exploring these ideas was fun. Every now and then it’s good to “get our geek on” and root around in what has formed us. I know this might be a bit more academic than most posts, but it’s good for us. The messy middle isn’t just for simpletons :).