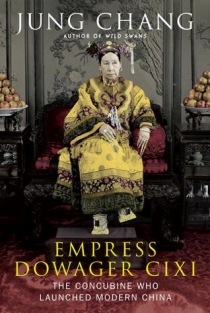 Love her or hate her, Empress Dowager Cixi does not leave us with the option of just letting her drift off into historical obscurity. Jung Chang’s (author of Wild Swans) recently published Express Dowager Cixi: The Concubine Who Launched Modern China is destined to become a must read for China hands.

I can hear a few of you sputtering at my claim and you are not alone. A brief glance through Goodreads reviews confirms not all will agree with me. The historical word on the street is that Cixi is “a despot and villain, responsible for the fall of the Dynasty” and Chang’s book challenges this take. For a brief overview of the book, click here.

I have five reasons this book should be part of any Sinophile’s top reads:

1. Express Dowager Cixi: The Concubine Who Launched Modern China is well written and engaging. But more than that, the book is clearly documented with 373 end notes enabling the reader to see how Chang came to her conclusions. And if you don’t agree with Chang’s conclusions, she provides a 13 page bibliography for you to do your own research.

2. This book captures, elucidates and recounts an important time period in China (1852-1911), placing Cixi in context. Chang looks at both internal concerns, such as death by 1,000 cuts and how political decisions were made and executed, and external concerns. The war with Japan in 1894 and the ensuing Treaty of Shimonoseki would be one example of an external concern and the historical implications of the treaty.

3.While it is unlikely we will see “Leadership Lessons from Cixi” in print any time soon (or ever) I was surprised how many tidbits I picked up from Cixi’s leadership style. I know! I didn’t see that one coming either. Here are four: (1) Make friends, using persuasion and promotion instead of force. (2) Work with others – because Cixi was never officially granted power in her own name, for her leadership to be successful she had to learn to work with others. (3) Be open to change while maintaining history and traditions. And (4) be willing to let rumors about you spread without defending them. (Chang would argue it was #4 which has led to Cixi being so misunderstood.)

4. For those of us who, at times, have thought that China is the most random place on earth, it’s not. If you want to understand, “your” China, this book is filled with a-ha and dot connecting moments. Think self-immolations are just a thing of recent news? Or the introduction of unimagined freedoms started in the 70s? In this time period we see “the embryo of modern China take shape.”

5. Though the focus is understandably on China and the Chinese, Chang provides insight into the roles of foreigners in China that is well worth taking note of. In 1865 when sciences were added to college teaching (in addition to the classics), foreign teachers were needed. Outrage ensued because “by tradition, a teacher was a most revered figure, a mentor for life, who imparted wisdom as well as knowledge, and who must be respected like a parent.” In addition to the role of authority being slowly granted to foreigners, “the arrival of missionaries, backed by gunboats, introduced a new form of authority into society … those who felt they did not or could not get justice from the local officials often sought protection from the church by becoming converts.” Space is also given to the Taiping and Boxer rebellions.

Chang doesn’t elevate Cixi into a perfect leader and she details when Cixi made misjudgments that cost her and China dearly. She did, however, challenge my thinking and understanding of what I thought I knew and if you read this book, I bet it will do the same for you.

This first appeared on China Source