“You will die a horribly painful death in China.”

I’m not from a faith tradition that is known for “words from the Lord.” So when I heard this deep in my soul as I unpacked from my first trip to China twenty five years ago, I (a) didn’t know what it meant and (b) didn’t know what to do with it. I assumed it was for many years down the road, might be related to my faith, and would be concerning to share with people, so I didn’t. 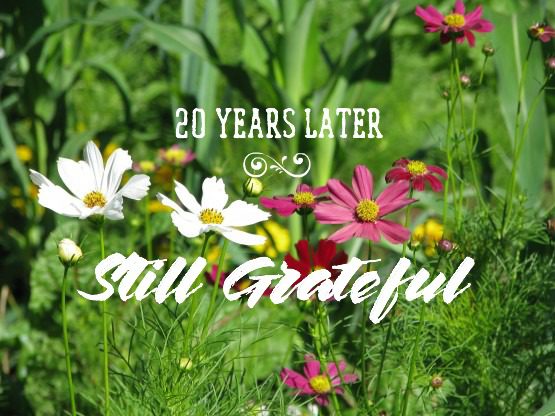 Camaraderie came in an unexpected place: a John Irving novel. When I read A Prayer for Owen Meany I found a kindred spirit in Owen who knew odd details about his death. Owen, I get you! This message didn’t consume my thoughts or leave me in fear; but I did wonder at times what a “horribly painful death” might be like and if I’d embarrass myself, others, or the Lord in the process. I hoped that I wouldn’t.

I rarely get sick so it was not the norm when one day I started feeling like I had the stomach flu after lunch. My colleague, Erin, and I assumed it was just a normal illness, nothing to be concerned about. I threw up a few times.  Who doesn’t? To cut a long story short, less than 24 hours later I was throwing up convulsively, had red spots on my skin, and my head felt like it was in a vice grip and my brain being squeezed.

I had bacterial meningitis and was dying a horribly painful death in China.

Twenty years ago on April 2nd I should have died. I choke up even now typing this. My parents were awakened in the middle of the night by Erin’s dad telling them he’d just gotten a call from Erin and based on her description, he thought I had meningitis, the prognosis wasn’t good, and he just thought they should know. They called my sisters and woke them with a similar message. Each sister reached out to friends and family and thus started the word spreading.

I did not die; I did have to relearn everything except—no comments—talking. Ah, even at the brink, I had things to say! I re-learned to walk, dress myself, write, and wash dishes; things that we take for granted, for a season, I didn’t.

On this twenth anniversary I want to say, again, thank you.

To my family for not coming. One of the hardest parenting decisions you have ever made was to stay away so that I could get the help I needed. Many questioned that call, but you held firm. And you paid the largest phone bill of your lives! Your frequent calls to Erin, and later to me, were worth every penny.  Elizabeth and Laura, even half way around the world, I felt your sisterly love and connection.

To my students who cared for me around the clock. Especially to the girls who, in teams of three, sat by my bed during the night, combed my hair every morning, and washed my face.

To friends and family around the world and in China who found tangible ways in a pre-internet world to reach out.

To the school officials where I taught for caring for me as if I was your own, because I was.

To Debra and Kerry who let me convalesce with you for a month in Hong Kong. Your home, ice cream, CBS nightly news, and two cats were the best way to return to the land of the living.

To Erin. The list is too long. But one image that captures so much of what you had to bear is this — when I had come out of the coma and was hungry, we didn’t have many food options and you made me something with oranges and yogurt. After eating I abruptly sat up and projectile vomited all over your clean sweater. You, the picture of grace, picked little bits of orange off your sweater and said it “was no big deal.” And it wasn’t, because you’re that kind of friend.

I don’t know why I didn’t die. It might have been the amount of people praying around the globe for me. I know many are prayed for and they still die. All I know is that “word” was lifted from my soul in Hong Kong and like most of us, have no idea when or how or where I will die.

While I would have been okay to die (I actually begged Erin to kill me), I’m grateful that I didn’t.  Today, I am reminded of the preciousness of life and how quickly it can change. Erin, my family said it to you then and still mean it today, we owe you so much more than can be put into words. Thank you for getting me to the doctor when I would have just stayed home and died in my bed.

To that 29 year-old-woman who had accepted a leadership position before she became ill and had no idea she would stay in China for many more years. She had not tasted the heights and depths of ministry pain, nor met many of the wonderful people she now calls family, I say this: Life is hard, God is faithful, and girl, you will have the time of your life. Enjoy.

I updated a post I wrote five years ago.