“Is this the end of the movie,” she whispers leaning towards me but keeping her eyes on the screen.

“No, sweetie, this is still the middle,” I whisper back.

Satisfied she doesn’t ask again until near the end. 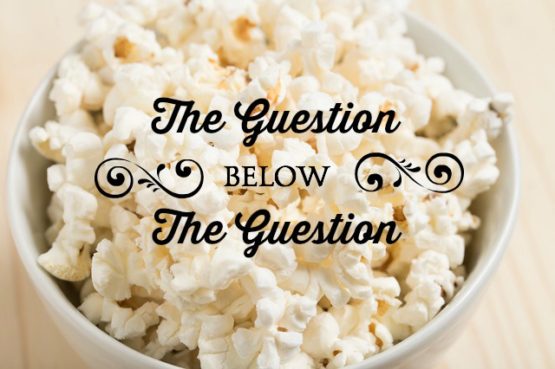 In recent weeks this scenario has repeated itself every time we watch a movie. At first I found it an interesting step in her development and wondered at what point she’d no longer need the clarification, sensing the story she is seeing. As an adult I can easily tell that we are in the middle of the movie – the horse hasn’t won the big race yet, the rat hasn’t gone public with his cooking, or the girl hasn’t learned to live with just one arm.  However, in her six-year-old way, she is echoing what we all long to know: does the story end here? In this mess? Is it going to get better? She is trying to orient herself to what is happening, looking for her “story sea legs.”

She’s not the only one.

What if David’s story had ended when Nathan said, “You are that man.”

What was going through Noah’s mind on day 117 after the rain had stopped and he sees nothing but water?

Imagine Peter’s horror when the rooster crowed. Have I blown it? Does the story end here?

In the middle of a messy story line (aka our lives), we want to know how much longer is this going to go on? Is there any end to this? How do I know where I am in the story? How do I know if this is near the end or if I am only just beginning? Will there be a happily-ever-after?

Unlike a movie that is under time and budget constraints – and often looking for a happy ending—life doesn’t come with such tidy restraints to the plot. If you study scripture looking for exact answers to specific questions about your cancer, this economy, that job, you won’t find them. Instead, we are promised a helper, a comforter, a companion to journey through the ups and downs as the plots of our lives take all kinds of twists. We are given truths that apply, yes! However, the Bible isn’t a magic eight ball.

David did repent, but his child still died and his story continued; it turns out that his conversation with Nathan was nowhere near the end of his story! Noah had thirty three more days before the water started receding, bringing that phase of the story to an end and launching his family into the next phase and more drama. And dear Peter had not ruined everything.

Your story is different than mine, but one thing is sure, our longing to know that we matter, that our story makes a difference and that we won’t be left in this mess are common to all. To these deep longings, Jesus crises out, “It is finished,” assuring that mess doesn’t win in the end. We matter, we are being used, and though we aren’t there yet, some day we will each turn a page in the stories of our lives and read: