I am—to put it mildly—obessed with Christmas lights. The other morning I snapped this photo. 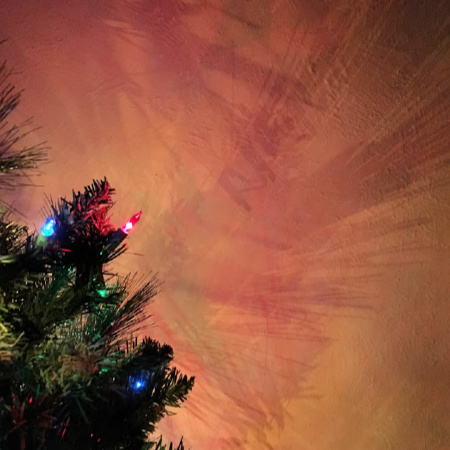 While maybe not the best photo ever, I was proud of the shadows on the wall. Playing around with angles, lighting, and distance, I could manipulate how big the shadows appeared. I also noticed that my eyes are drawn up and to the right. It was early in the morning and I thought, “Huh, that’s interesting” as my eyes kept drifting up and right. And then snap, a random comment I heard last week snapped into place in my brain.

We are able to multitask, but we cannot multi-focus.

It is almost impossible for me to focus on the tree and the “scary” shadows on the wall. Try. I’ve spent about thirty seconds trying and my eyes will either focus on the red light or the shadow. I can take them both in at the same time, but I cannot for the life of me focus on both.

What was Mary told when the angel came to her? Fear not, for you have found favor with God.

What was Joseph told in his dream? Do not be afraid to take Mary home as your wife, because what is conceived in her is from the Holy Spirit.

What were the shepherds told when a ginormous group of angels appeared? In fairness, at first only one angel appeared and he said, “Fear not, for behold, I bring you good news of great joy that will be for all the people.” And then the rest of the gang showed up.

In every instance, fear is understandable, even reasonable. But fear moves your eyes from what is real and known to the scary shadows. And shadows are not always an accurate reflection of reality. There can be great beauty in shadows, so the takeaway is not a simplistic, “Ah, if I can just eliminate shadows, I can danger-proof my life.”

Even though the phrase fear not is used, I do not believe God is telling us to deny natural responses to situations. Instead, just as you can see both the shadows and the red light, you know the fear is there, but the fear is no longer the focal point.

The angel invited Mary to focus on him and the message he came to deliver, not her fear.

In his dream, Joseph was invited to proceed with his engagement to Mary. The focus was no longer on how to deal with the situation or how to preserve her reputation or ways or what others would think.

Likewise, the shepherds were invited to focus on the good news, not their racing hearts.

This advent, pay attention to what you are focusing on. And if your eyes keep being drawn to the scary shadows of your life, don’t berate yourself, just adjust your focus.

It is that simple. And that hard. Thankfully, God loves our humanity. He does not weary in telling us to fear not. So, I will say it one last time.

Fear Not for the shadows of your life are not the full story. Instead, look for the Light. Focus on what is true, good, right, and trustworthy.