It started in late spring. Our irises bloomed pathetically. Pa-to-the-thecic-allly. I’d estimate 10 sad, small blossoms for 200 plants. I’ve become empowered by how much the internet has to offer on gardening advice. I know, right? Late to the party, but still happy to be here :). That’s me.

My friend the internet told me irises are to be divided (thinned out) every 3-5 years and if they aren’t, they will stop producing well. #Oopsies. #Howaboutnever?

Life lesson #1: We’ve all got irises that could use our attention, yours just might not be plants. If you ignore them, sadly they only get worse.

I also learned that the best time to thin them is 8 weeks after they’ve bloomed and in Colorado the best time is mid-July. I found this out in June. If you know me, I am the kind of person who does not like a project hanging over my head. One of my life motto’s could be: Let’s get to work, people! But if mid-July is better. Sigh, I’d wait.

Life lesson #2: Not everything needs to be tackled RIGHT NOW. You might need to wait for a better time.

Guess what last weekend was?

This project excited and terrified me because the truth is I wasn’t really sure what I was doing; but I knew something had to be done if we ever wanted to see flowers again. So, this is the process I went through and it took so long it gave me plenty of time to reflect :). Okay, maybe not the best sales pitch to get you off and working on your “irises,” but tis true.

Here’s what I started with (and yes, there are two trees growing up in the midst): 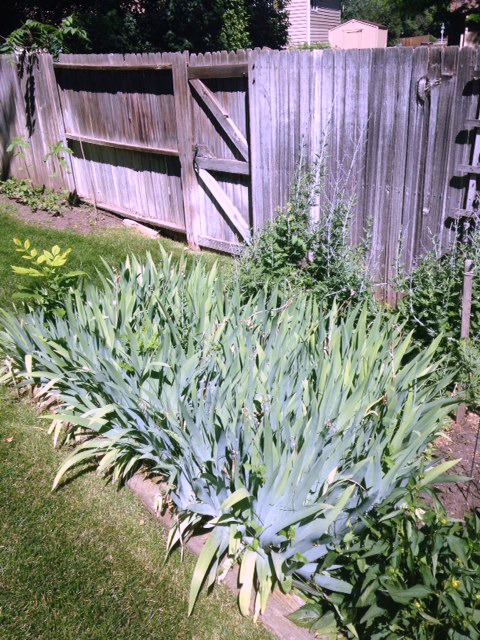 1. Prepare. I told you I watched two videos. It really helped me to see people doing what I was going to do and say things like “Be ruthless! The iris can handle it” as he hacked away. Both videos also recommended getting “triple super phosphate” so after going to the gym on Saturday morning I stopped by a local hardware store to get some. “What? You want what? I’ve never heard of that. I only have one house plant.” Said a sales clerk. “I saw it on two places on the internet, so I know triple super phosphate to exist. The internet doesn’t lie.” I said with a smile. Though fun to say, triple super phosphate is only sold at green houses. To be purchased later in the day.

2. Start. This seems self-evident, but it can be tricky to know where to start, especially when the roots are like underground Ft. Knox. Even when you’re not sure where to start, start. After my third attempt and wondering if I would quit before I began, one corner started to loosen.

3. Use the right tools. Or at least good enough ones. My philosophy towards life is to try and then get the facts (that whole leap before you look thing I’ve got going on). So, when I say prepare, I mean just enough to get you going. I tried a spade. No go. Then I found a fork thing in the shed. Much better! Until the rotted nail in the handle broke off. But I knew I couldn’t go back to the spade. I found a kind of pitch fork thingy in the shed that looked like I should be shoveling hay from the second story of a barn down on hungry horses like they did in Little House on the Prairie. Whatever keeps you moving, right?! Sometimes the right tools are a combo of what’s in your hands and in your head. I think Pa Ingalls would have been proud.

4. Progress becomes cumulative. After telling myself I couldn’t stop for a water break until 25% of the iris were removed, I began to wonder if I’d ever drink again. Okay, this was at the start when I couldn’t figure out how to start and I knew if I took a break too early, the whole project would be doomed. But once I figured out what was going on, I was able to work to 33% before I took a legitimate break. And then Stella got her groove. Okay, so the heat may have had me all over the entertainment world. Next break was at 90%.

5. You can produce a significant amount of waste! Who knew that the rhizomes (not bulbs, I learned) which is what dies after several blooming seasons, and all of the green leaves could be so heavy! Three trashcans later (because I had to distribute the weight) and I wished I was digging up trees, they are much lighter.

6. As you near the end, get excited you can make it pretty. You’ll see in the picture below what I’m talking about when it comes to iris, but I bet your big project has pretty parts too.

7. Share! I had a lot of left over potential plants and I hated to throw them away … so I took a bin to church and though I didn’t give them all away, I did find a few new happy homes.

And then you are done: 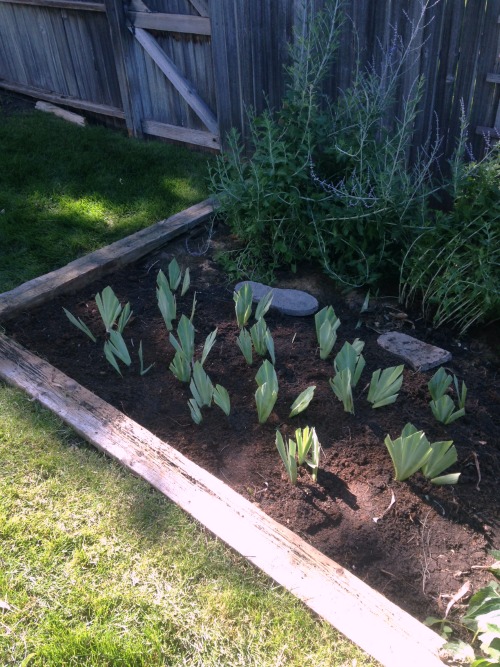 We all have parts of our lives that have gotten out of hand. This isn’t our only iris bed and next Saturday will find me with my hay shoveling pitch fork working another part of the garden. What projects have you been working on? Or needing to work on?

And if you’d like to learn more about iris dividing from pro’s here are the videos I watched: One and Two.