My word for 2016 was Abundant (you can read the back story here).

Abundant is the kind of word that breathes life, isn’t it? 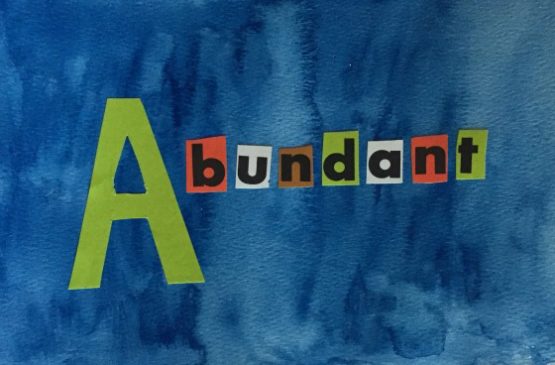 The year, and the word, started off they way I hoped an abundant year would. Looming Transitions was published and did well. I had my first podcast interview—and have been on two others in 2016. Here I get to talk about one of my favorite subjects, books! My friend Joann and I were filmed for Serving Well in China, a course that prepares people for life and service in China. I helped plan and put the second annual Writers on the Rock Conference (sign up now for this year’s conference). Want to hear the whole Bible, 60 seconds per book? You can! Not sure where to start? How about Nehemiah (Part one and Part two)? I love making the Bible accessible!

Yes, yes, this is what being Abundant looks like. Endeavors paying off. Hours of work reaping rewards. Making a difference in the lives of others.

But over the summer, Abundant turned a corner and lead me down a side alley. I wasn’t sure where we were going; I looked over my shouldn’t once or twice wondering if I should turn around and head back to familiar roads.

In July and August Abundant taught me afresh that hope is risky, but it is also the well spring of life. Without hope, we merely go through the motions; in the effort to protect ourselves from pain, we also isolate ourselves from joy. I think I preferred my book having babies to having a hope dashed.

Abundant whispered that she also involves taking risks and opening yourself up to disappointment and confusion.

However, it was in September when my friend Mike died, leaving his wife a widow, his children part-orphans, and the rest of us never to hear his laugh or be engulfed in a bear hug; I thought, There is no way—NO WAY—I can claim my Abundant year as the year that Mike died.

Abundant doesn’t look like loss or pain or grief.

Hundreds of us gathered for Mike’s memorial service, including about 40 of us who had lived and worked in China. Being Abundant looks like a throng who drop everything to be together. To hug each other. To be in shock together. To say, “How can this be?”

And then Abundant reminded me that we will all be known for something, what will I be known for? The most used word to describe Mike? Love. It might sound trite; but in his case, it was shared that as a young Christian, Mike decided he wanted to be known for being loving.

Abundant reminded me to pick a point. Aim for something. Put your sights on a great goal.

In the end, we will all be known for something. What am I living my life towards?

Just before Mike died, I attended a writer’s retreat and we did Lectio Divina around Psalm 37 and I knew my word for 2017. Verily. Isn’t it lovely? Verily seems like another way of saying yes or indeed. But it’s the phrase Verily I Will Feed You that captured me. 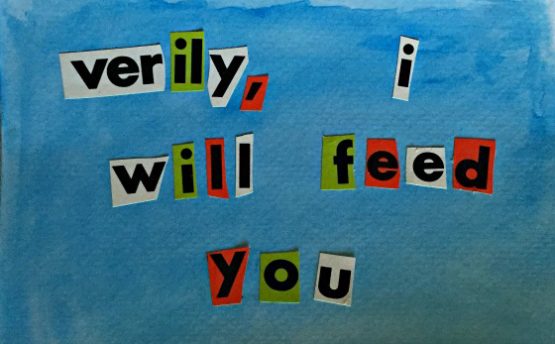 But I will feed you wouldn’t leave me alone.

Since October I’ve had a distracting infection that stubbornly wouldn’t respond to medication. After begin referred to a specialist, he said, “Well, I think you’re just going to have to starve it out of your body.” Words everyone loves to hear going into the holidays.

Wait, isn’t Abundant supposed to look like health? and not being in pain? Shouldn’t she involve words like feast instead of starve?

Verily, I will feed you.

Ah, this is why I have been meditating on being fed—for a couple of months before I enrolled in a personalized crash course in nutrition. Top on the syllabus?  The foods I can and cannot eat—for now, Lord willing the extreme restrictions will end.

Abundant’s last lesson of the year involved how restrictions can involve freedom and creativity. The less I could eat, the more I enjoyed when we discovered a new few I could eat. I loved getting texts from a niece or a sister, “Hey, can you eat almond flour?” or “Can you eat sunflower seeds?” We have rallied around my diet, tried new recipes, and rejoiced at small victories.

I can testify it is possible to make it through Christmas, your birthday, and Chinese New Year without really eating what others are eating . . . and . . . wait for it, be fed abundantly. Feasting not just on food, but people, experiences, and their generosity.

Based on previous years, I can say that 2017 is going to bring me lesson on being fed (I still want verily but God seems to have fed for me. So God and I may each may end up picking a word for me).

Do you have a word for the year? You might think, “Hey, it’s February, aren’t you late to the party?” Being Abundant also loosened the ties about when you “should” do something. :)!