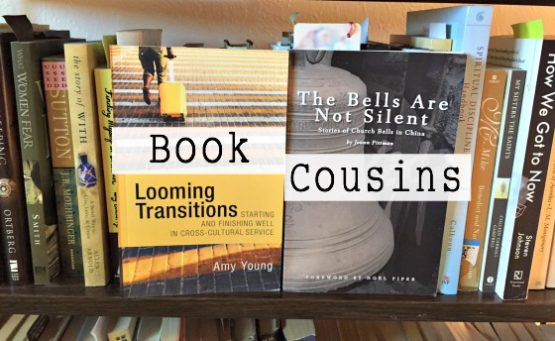 You may wonder what a book cousin is. Come near and I will tell you a story.

Once upon a time Amy and Joann worked for the same organization in China. As colleagues, they trained and then supported foreign English teachers scattered around China. But more than that, they were friends, good friends.

One of them was destined to write a book and her name was Joann. One of them was destined to go through a mid-life crisis and thought that writing a book would be a brilliant career move because she was lacking in skills that the work force in America valued and she had grown accustomed to eating and heat in the winter and needed money and when she was crazed she was like a mama bear storming through life. And her name was Amy.

But we are getting ahead of the story.

Joann unleashed a monster when she helped Amy set up a blog; in fact one of Amy’s earliest posts involves a conversation over green beans at GU and the unleashed monster and maybe a bit of Joann’s sighing at what she might have done to the world.

The would often meet at the GU after a long work day or one of them returned from a work trip. Another evening Amy learned about hashtags as they munched on fried peanuts waiting for their Kung Pao Chicken. GU became a bit character in the story of their becoming authors.

One spring Amy set out to write 500 words a day on her book. And she did. From mid-January until the end of April she wrote six days a week on what would become the backbone of Looming Transitions.

That same year Joann traveled as a translator to Sichuan and when she returned, recounted discovering a church bell from—of all places—Coffeyville Kansas. Joann had called Amy while on the trip and told her about the bell, and the Kansas connection, and the indestructibleness of the church. But it was at GU while eating the deliciousness that poorly translates as family-style-tofu, that the full story came out.

Weeks, then months passed. Over time, plates of green beans, peanuts, and spicy meat were consumed as Joann and Amy moaned and celebrated, each believing in the other’s book more than her own.

Joann caught the “Bell Bug” as she called it. Having discovered one bell in Sichuan, she knew more must exist. And she was right. Always up for an adventure, Amy joined Joann as they hunted for bells in Shanghai, Qingdao, Harbin, Tianjin, and around Beijing.

And then one day the GU was demolished in the name of progress.

Unrelated to the destruction of a favorite restaurant, Joann boarded a plane and moved back to the U.S. Several months later, Amy followed suit.

And time passed. And editors were hired. And cover designers were found. And slowly, slowly all those consumed peanuts and cups of tea brought forth life.

January 12, 2016 Amy announced the birth of Looming Transitions. Joann celebrated and was quick to text or email whenever she heard of someone reading her friend’s book. And then it was Joann’s turn. The editing done, the cover ready, the layout completed.

Come close children, as I lower my voice with a dramatic pause—this is where our tale takes a turn befitting a movie. What day do you think The Bells Are Not Silent: Stories of Church Bells in China

I know, I know. Had I not seen it with my own eyes, I might find the timing a bit far fetched myself.

But this is the true story of how The Bells

and Looming Transitions came to be book cousins.

I love The Bells Are Not Silent

not only because I got to have a front row seat to the research and writing (and am mentioned in the book—keeping it real people), but because it highlights how God is at work all the time. We are the ones who forget to look or notice.

Here is the description from the back cover of Joann’s book:

When Joann discovered a 126-year-old bell hanging in a church in southwest China she knew that there was a story to tell. Who had decided to ship it? How had it been transported? How had it survived the political turmoil of the 1950s and 1960s? She also knew that if there was one bell, there must be others. Over the course of eight months she travelled around China looking for old church bells, finding ones from France, Germany, Russia, and the United States. This book is a collection of stories about those bells. But more importantly, they are stories of God’s faithfulness to his church in China.

To those who have eyes to see, let them tune in to what is around them. Amen? Amen.

Leave a comment sharing place you have seen God recently. Don’t overthink :)! Just share and you’ll be entered to win a copy of The Bells Are Not Silent: Stories of Church Bells in China