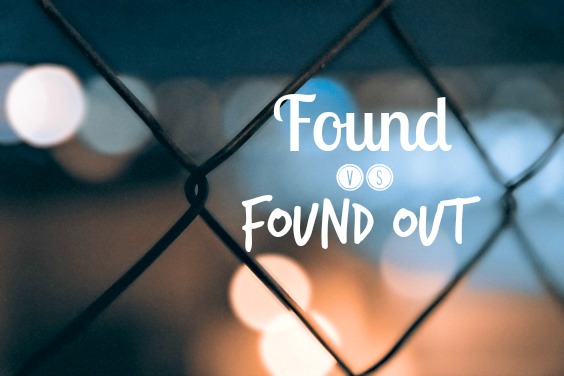 I was spending time with dear friends and in introducing me to their friend, they told him, “This is our Amy who lived in China for years. We’ve told you all about her.” He said to me, “Oh, I bet you’re fluent in Chinese then.” Once again I had to say, “No, I’m not really fluent in Chinese. I’m adequate, but I’m not very good.” It was a moment of feeling found out.

I had to lean into that and to say to myself, “That’s actually not the truth. I have not been found out because this doesn’t need to be a point of shame for me.”

The Velvet Ashes book club is reading What Women Fear by Angie Smith and chapter three is “The Fear of Being Found Out.”

As I read the chapter, it raised this question for me: what’s the difference between “being found” and “being found out?”

The phrases only differ by a preposition, but what a difference a preposition makes, eh? Between being found and being found out. If you’re lost, there’s nothing better than that sense when you realize, “Oh, I know where I am.” Or when someone gives you clear directions and helps you to be found. The relief that floods you can be felt in every pore. It is visceral.

But if you’re found out is initially not a relief. If you’re afraid that something is going to be found out about your family or your finances or any other number of things, there’s fear there.

As we remember Christ’s willingness

to restore the chopped off ear of the soldier who came to arrest him,

to be mocked and beaten,

to die a painful death.

To find us. And in finding us, he rescued us from the folly and destruction of our sin and restore us to who we were really meant to be.

God is in the business of helping us be found, not found out.

Amen and Amen. Thank you Father, Son, and Holy Spirit. We are still in Easter Time and the marvel of it all never dims.