I am excited today that Jane McKay will be our Help Us Understand interview, and help us she does! These interviews will be a bit longer than my normal posts, but these are complex subjects and worthy of creating a bit more space.

Jane, we are grateful you are here today. Thank you for trusting us enough to listen to you and for the ways you will help us understand those who are spiritual better. 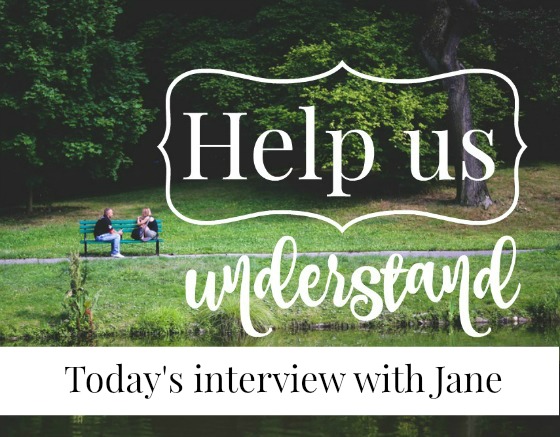 1. What does “spirituality” mean to you? If you practice some form of spirituality, what does that look like?

To me, spirituality means the belief in a higher power. I don’t believe one need be religious in order to be spiritual; that is, it’s possible to not practice ritualized worship, but still have an intrinsic spirituality.

2. What has been your experience with Christians and the church?

I was baptised in the Episcopal church in the Denver, Colorado. We left that church when I was a baby because the priest (who was my father’s college chaplain and mentor) was horrible to my mother and the other ladies of the Altar Guild. Then, we became Catholic for two years, around the same time that Pope John Paul II was visiting Colorado for World Youth Day. We left that church because “they knew three hymns and the priest was a heretic” — my dad’s words.

We then joined a Western Rite Orthodox Church, where we attended until I was 12. We left that church and my father was ordained as an Anglican priest–we used to drive 2.5 hours to church in Cheyenne, Wyoming so he could practice at his own parish on Sundays. My father got into a disagreement with the bishop of his diocese, which drove him briefly away from the Anglican church, so we went back to the Orthodox Church for a few more years.

We left that church again because the priest began preaching politics during his sermons… but more than that, when my father spoke to him about it, he began mentioning our family in his sermons as dissenters. This was the church in which I had found faith, and I deeply felt the loss of this church family. My family then joined an Anglican Church, which I only attended sporadically because of college, but by then, I found that I disagreed so fundamentally on large socio-political issues that I couldn’t attend ANY church with a clear conscience.

When I moved to California, I briefly joined an Anglican Parish, but the priest put pressure on me to go to seminary (after I told him that I had BRIEFLY flirted with the idea of becoming a nun four years prior instead of going to college), and we argued so fiercely about gay rights that I found it impossible to continue to associate myself with him or the church. I have not returned to any church since.

I would consider myself to be agnostic at this point. My best experience with Christians has been through a Christian Women’s writing group that I’m involved with, which I joined when I still felt a connection to calling myself a Christian. The women in my group are very much in agreement that faith is a personal journey, and put no pressure on each other to ‘fit’ into a specific ideology or theology. They’re supportive, kind, and many even share my extremely liberal political views. They’re also patient with those of us who no longer consider ourselves members of the church. But my experience in the church, when actually attending a church, was frustrating.

I used to be told that I had to wear panty hose and a skirt at church, because it wasn’t appropriate for a woman to show her legs. That I couldn’t show my bare arms. That I’d go to hell if I ever got a tattoo. That I’d go to hell if I had sex before marriage. That women couldn’t be priests/deacons/subdeacons/preachers because of the Apostolic succession of MEN. That truly holy women covered their hair in church.

Despite feeling like I was being held to impossible standards, I had it good when it came to being “allowed” to mostly dress how I wanted to for church (I wore dress pants whenever I got the chance) and my clothing really wasn’t policed at home (and on the few instances my parents said anything, I laughed it off). I could cut my hair however I wanted, and I’ve since gotten tattoos, and taken ownership of my sexuality… but it’s no thanks to how my identity as a woman was treated in the church.

If I wore a shirt that the Priest’s wife deemed inappropriate during our time at the Orthodox church–when I was going through puberty and growing into my body and my identity–my mother would hear about it. I once got into a heated argument at my parents’ Anglican church with a woman who was telling me about a crime show she watches. A female character on the show was raped, and the woman told me that the character was “asking for it, considering how she was dressed.” I never felt like I could go back to that church again, if that was how women thought of other women.

As I grew into my identity as a cis-gendered! bi-sexual! hetero-romantic! tattooed! liberal! feminist! who doesn’t believe in the antiquated idea of virginity, and is pro-choice, pro-abortion, pro-contraception, and an LGBTQ+ ally… there just didn’t seem to be room for me in the churches I attended as a child.

3. If you were a part of a spiritual group/community, what would you want present?

What would you not want present? Support for the rights of women, people of color, LGBTQIA2s+ people is essential in my mind. But, the main thing that has driven me away from the church is a lack of support for what I feel are exclusionary views. I can’t justify being a part of any group who I feel classifies their love for other human beings according to the other’s personal lifestyle choices, ie. their right to choose who to love, etc.

4. What are some of the unanswered/difficult questions that you continue to wrestle with?

When my father got extremely ill, and my brother came forward as an Atheist, he asked me, “how can an all-powerful God let Dad get sick?” He’s right. Why do people suffer if God is all-loving? Why do humans kill other human beings? How can any God let such suffering happen? WHY does my uterus determine my right to paradise? Why is my attraction to both women and men considered unnatural and sinful, when humans are not the only mammals on Earth who exhibit homosexual behaviors? Why does the length of my skirt matter to a God I cannot see, hear, or touch–who is not made of Earth like me, who supposedly created all things?

5. What do you wish Christians and the church understood?

Christianity is supposed to be a love-based religion, but there is a whole lot of bad press for Christians right now as God is used on extreme television programs to justify institutionalised gender inequality (and violence against women), disdain for the poor, lax gun control laws, and the fight against marriage equality. Yet, the majority of Christians I know (especially those in my age bracket) have nothing but love to share. It’s that love that will help spread a better image of Christianity, instead of what the media shows.

Jane, after hearing your story, I am moved to respond. But true listening doesn’t involve much talking, so I simply say thank you. Your words will not lightly be brushed off of me or others who read this. We appreciate you helping us understand. Thank you.

(In the spirit of listening, comments have been turned off.)