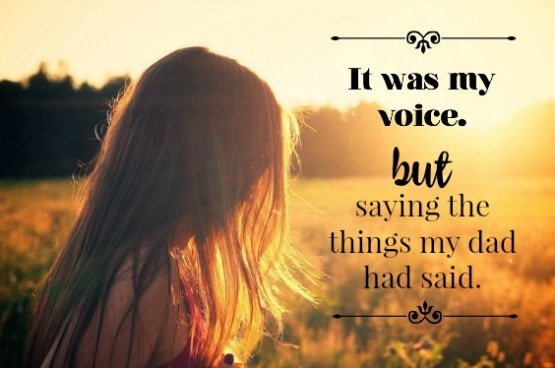 “Aunt Amy, I’m nervous. I’ve never run without Dad.” I was driving my 10-year-old niece to a school-hosted 5k race.

She loves to run, and she’s good at it. Normally she trains and races with her dad, but he was out of the country on a business trip. Her mom had other obligations, leaving this niece with the backup to the backup plan. I had volunteered to run with her, but we both knew I’d slow her down.

In the car I asked her what her dad usually does during the race. “He mostly encourages me saying things like you got this, good job, you’re more than halfway there, we can slow down so you catch your breath, and just a little bit more.”

We talked about how they have run quite a few races together. She knows what he would say and she can repeat those words of encouragement to herself.

I read my book in the car while she ran and when it came time for her to finish, I stood near the finish line, cheering. As she rounded the last corner, her face radiated focus and joy as she ran towards her second best time.

Although she missed her dad, she learned she can run a race without him right by her. Afterwards I asked her if she heard his voice in her head.

“No, it wasn’t his voice. It was my voice in my head, but saying the things he’d say to me. I’d say you got this, good job, you’re more than three-quarters there, and just a little bit more.”

Are you thinking what I’m thinking?

It was my voice, but saying the things my dad had said.

This is the power and importance of self-talking the gospel. She had spent time with her dad, training and racing together

We spend time with God. We become familiar with his voice. We fill our heads, hearts, and souls with the truth of the gospel. You’ve got this. Blessed are those who mourn. Mercy triumphs over judgment. Blessed are the peacemakers. Just a little bit more.

It might be your voice you hear in your head, the question is whose words are you repeating?

You know how when God wants to make a point He’ll come at it from several angles?

A few days after the run, her oldest sister had a different experience. This one is in marching band and in preparation for an important competition her band instructor invited an expert in to give them feedback.

{If you hear a primal roar as you read this, you’ll know my opinion of this so-called expert.}

He used his power to tear down and shred everyone. She is in the clarinet section. As she retold his words you could hear how this was echoing in her soul: “Oh, I didn’t even realize there were clarinets until right now when I saw you. You were so quiet I had no idea you were even a part of this band performance. Obviously you need to be LOUDER.”

I had no idea you were even a part of this band performance.

After months of learning the music at home, rehearsing at school in the blazing sun, marching in formation again and again, he said…

I had no idea you were even a part of this band performance.

You can see how this could become a negative echo in her head and heart.

The next morning, when she was still dejected, we talked about knowing who has earned the right to be in your head and who has not. If her band instructor, who knows and loves her section, said to be louder, then yes, listen to him. But not everyone has earned the right. That expert had not built trust with the band.

I know I’ve written before about how important it is to tune into the voices in your head. They will often be our voices, but using other people’s words. We need to feed on the life and hope of the gospel.

When you are running without your normal running partner or you are marching with your section, the voice you hear is some version of:

You’ve got this. The word of the Lord is a strong tower. A gentle answer turns away wrath. Love strengthens the church. Just a little bit more.

What does God want you to say to yourself today?

A version of this first appeared on Self Talk the Gospel.