Can you believe it was a year ago I was putting the finishing touches on packing up my life in China? The following was written on one of my last nights and this week seems a fitting time to republish it. I am thankful for that evening and friends who will walk with me even I’ll be leaving and that God has the whole world in the palm of his hand.

I texted her You want to go for a walk? It had been a day of defrosting and sorting while the rain poured cleaning out the air. Still full from lunch, I wanted to walk before doing yet another round of dishes.

Sure. Let me finish bathing the kids and hubster will put them down. (That’s not really how she talks, that’s an Amy translation.)

And so we walked into the cool of the night, headed first for the local park (pictures at that link from a morning walk in the spring). It’s alive at night! Turns out there is a “dancing with big ribbons” club. Who knew?! Maybe I can bring that back to America. Maybe not.

We exited the park onto a street that’s under massive construction and has become a bit of a migrant village alive with village activities. A man getting his hair cut under a single light. Stores spread on blankets. Food vendors selling freshly cut fruit. 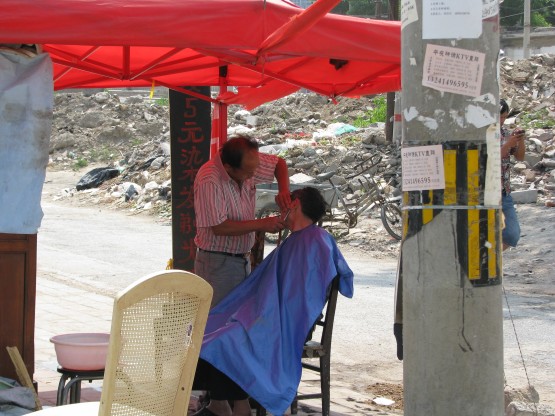 Years ago, to the left of this picture, a massive four lane bridge was built going over a canal. On either side of the bridge small hutong/alley neighborhoods existed. But that bridge meant that the City had other plans and come one day, those alley communities would be replaced. Both sides now look like the background of this picture. But every night, that abandoned bridge becomes a local community setting with vendors and restaurants and snake oil.

On nearly my last night, my heart broke afresh.

Going up the stairs to the “bridge” we heard a loudspeaker and if you’ve been in China, thought nothing of it. Loudspeakers are a dime a dozen. But there were flashing lights and a ginormous crowd gathered around. This, this in a country where you need a permit to gather in public spaces, was not a dime a dozen.

In a poignant juxtaposition as the tall buildings of Beijing lit up in the background, we had stumbled onto a countryside superstitious blessing ceremony. We joined the crowd standing on tippy toe to see  — at the far end, the truck that acted as stage and sound system with flashing lights, there were two statutes that one of the “sponsors” kowtowed to and then the announcer said for anyone to come forward and for only 20 kuai (about $3.25) you too could be blessed and given a golden chain.

Where was I? What was happening? Were there plants in the audience? Is this what the shaddy medicine men of the wild west did, but with a Chinese twist?

Too many people went forward for them to be plants. Too many longed for blessing — to be touched by something holy, something that would heal them, bring them fortune– for the desires to be fake.

We were in the presence of raw longing.

To see people with so little give so much to something so empty.

The organizers had drawn a line around the perimeter and asked us, the crowd, to step back outside the line. Only two of us did, you can guess who. The crowd couldn’t help but to press in, to see others blessed, to see if a miracle was going to happen.

I thought of other crowds and of the One who had compassion on those gathered and longed to bless them. Blessed are the poor in spirit and the meek and those who mourn. On he went saying “I see you, I know your condition and the longing of your heart and I want to bless you.” Really bless you, not with a gold chain necklace that looked like carnival fare, but with blessings that will last.

We turned and walked away, sobered again by the remembrance that though great, great changes have come, too many hearts that long for blessing, are listening to charlatans. “How can I leave?” I asked. But I will, and it will be OK, because the work here has never been about me or about foreigners, the work here is the Good Shepherd’s and he loves his sheep. He does.

But every now and then, the Good Shepherd lifts the curtain, allowing us a behind-the-scene-glance of the fields yet to be harvested and reminds us — the harvest is great, keep praying, keep investing, there are are still too many who long for blessing.

Will you join me afresh in praying for China? My dishes still need doing and I hadn’t planned on writing today. But I am disturbed in the best, most holy way.

Have you seen something similar to what we did last night?