When I arrived in Chongqing on Monday I texted a friend, “It’s so green. It feels like home!” By which I meant it felt like Chengdu, Sichuan, my Chinese hometown. When I first lived in Chengdu, I didn’t realize it was the South I was assimilating into my heart and psyche. I thought it was China.

Flashback to a more recent time, an outing in September to the Beijing botanic gardens. While there I saw this sign: 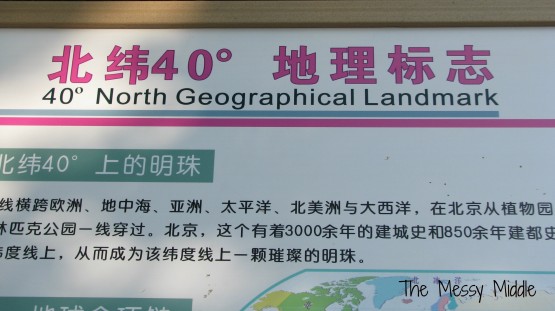 Now, normally a display dedicated to the 40° North Geographical Landmark would not be something that I would linger over, but it turns out that  Beijing and Denver are both on the 40°. Who knew?! Ok, maybe quite a few people. If you  asked, “What does your home town and your current town have in common?” I can tell you definitively this random tidbit would not have been the first thing to pop out of my mouth.

In my babbling about these two great places, I would have gotten around to the fact that despite their differences, they have both been home to me. It’s an interesting fact that on opposite sides of the world, I have lived on the 40°, but that’s all it is, an interesting fact.  (I feel it my duty as a Denverite, to point out to those reading this who have never lived in North America that Denver is actually considerably to the left of where it’s located on this map. Glad we cleared that up.)

Returning to early this week and the text I sent.

I am sitting here trying to put words to something wordless, that deep place in your being where you just know you are home. Chengdu is known for rain and clouds, we rarely saw the sun. The food is spicy and uses both red and numbing peppers. Ma jiang (Mahjong) clinking tiles fill the air. In general, the people are small and have waists the size of my thighs. The local dialect switches standard Mandarin tones, have some different words, and even the locals have to clarify if someone is saying four or ten. Tea drinking is an Olympic style sport.

I thought all of this was China.

The sun shines in much of China. Some food is so bland, it’s just greasy vegetables. I rarely see/hear a good game of Ma jiang (let alone whole Ma jiang rooms!). Some of my junior high students are taller than me and the local Beijing dialect’s primary interesting attribute is adding and “r” sound to the end of words. Tea drinking is more social than sport.

So when I see scenes like this as I walked on the campus, 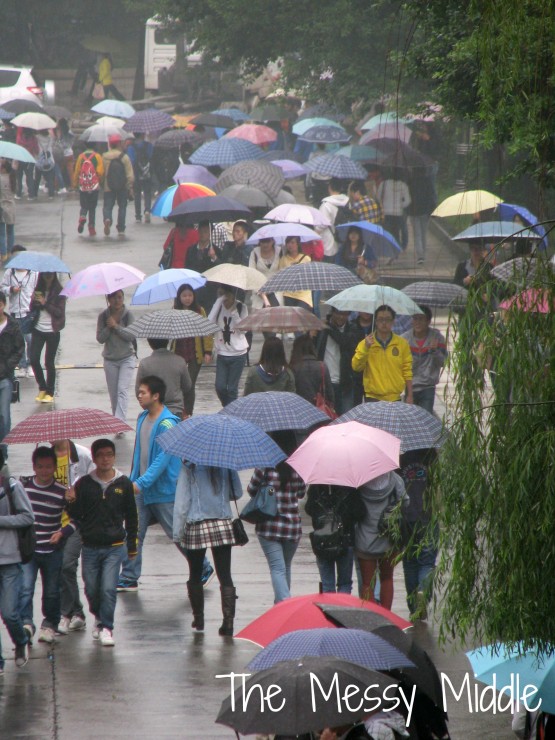 Where do you feel at home?