I love/hate one of the cardinal rules of blogging: Find your niche.

I hate it because it feels restricting to me.

I love it because it frees me from being all things to all people. I know The Messy Middle isn’t going to be of interest for everyone. I know it, but still it kind of annoys me because I love people and who wouldn’t want to talk about books, and sports, and embracing mess? Um, people who aren’t that into reading, don’t really like sports, and prefer black and white thinking. 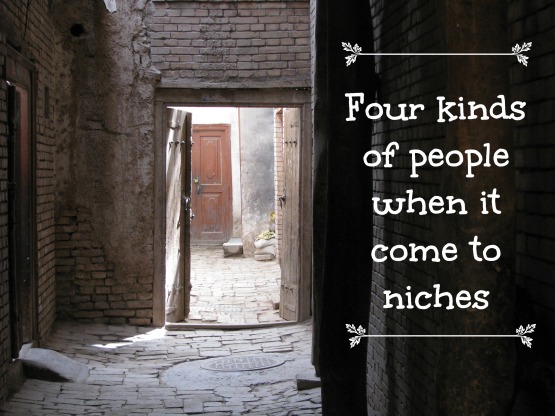 When I think about finding a niche, be it blogging, or when you move to a new place or are in a new stage of life, if I think about it like a puzzle piece, I panic.

And the world starts to cave in on me.

Puzzles get more fun the further I go. (Clearly puzzling is not my niche!) At the beginning it’s an overwhelming jumble, requiring finding just the right spot for each piece with nothing looking like anything resembling a puppy in a field of flowers. Details and slowing down and high levels of focus are So. Not. My. Thing! I’d rather be screaming my head off at a sporting event, surrounded by action.

If niche is synonomous with “finding the exact right place,” I’m doomed.

How about if we substitute flavor for niche? That breathes life into my soul! What does cinnamon go with? Well, I wouldn’t sprinkle it in Diet Coke, but can banana bread have too much I ask you? No. Here’s the gospel truth about flavors like cinnamon, they can go in a host of recipes.

Yes, we need to know who we are and where we fit, but it’s not once and done. Our sense of taste and the flavors we are drawn to change over time and season of life and what’s available.

Jesus used parables about four kind of soils, but because part of my niche is cute stories involving nieces, let’s have one involving them and flavors.

Niece #1 is a foodie. As in, she would be horrified to know I don’t measure cinnamon when I bake and after adding some, will usually dump more in. Her sense of taste amazes and scares me. “Um, Mom, I’m thinking next time you cut use a little less cumin but more nutmeg and the vinegar, I’d skip it. Just a thought.” What in the world? Could she be more detailed? Let’s just say, she loves me, but won’t be screaming her head off at any football games next to me. Some people know exactly what they do and do not like in a niche.

Niece #2 has what I would call, a normal range of flavors. She’s like me, she likes to eat, but it’s as much about the people as the food. If not more so. Some people are just happy to be around others and the topic is secondary.

Now Niece #3, if this was about soil, she’d be the thorny bush of eating! The place where food goes to die. She has a narrow and exact sense of taste. She knows what she likes and other than meat, she likes about one fruit and one vegetable. Bread? YUCK. She does the best, “You’re trying to poison me” act of all. Some people will participate in a very few niches, but those they do they will be faithful to the death! (Now in all fairness, something weird happened recently and she now eats two fruits, two vegetables, and some soups. Miracles are not just in biblical times!)

Rounding out the four types of niches, is Niece #4. When it comes to flavors and eating, this is the girl who had three very concerned older sisters when she started 1st grade. Two sat her down the week before school, having packed her a practice lunch, and timed her eating, telling her lunch time is no joke and if you aren’t focused and spend all your time chatting, you are doomed. She can be one of the most cheerful and enthusiastic people, but she’s not the most focused when it comes to eating. Some are going to move from niche to niche. Enjoy them when they are there. Don’t sweat it when they don’t show.

So, there’s my flavorful take on niches :)! Yes, niches are important, but they are not the holy grail of being the perfect fit.

Linking with Velvet Ashes and Congrats to Morielle your copy of Fight Back With Joy by Margaret Feinberg is on the way!