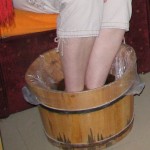 Oh the foreigner has such good Chinese,” she gushed in Chinese.

Having just given me one of the most wonderful foot massages of my life, I was a bit post-massage relaxed and it took it took a minute for reality to catch up with the comment. While my Chinese is not as good as she said, Chinese are very polite so I wasn’t surprised by it.

The thing is, I was at Foot Joy {aptly named!} in Texas when this was uttered.

Yes, technically, as a non-Texan I am a foreigner, but that’s not what she meant. To most of us Westerners, the concept of foreignness is more tied into location than a mere state of being. As an American, when I am in the US, I am not a foreigner; when I am anywhere else in the world, I am. Not so in the Chinese mindset, it’s more a state of being. Either you are Chinese –literally “insider” –or you’re not.  No matter where I am, I will always be the foreigner to a Chinese person. And you know what, that’s OK.

It’s not only the Chinese who see me as different, as other.

Back in Denver, my family went out for lunch at our favorite Dim Sum restaurant (The Empress). There happened to be a new waiter from China who was delightful and rather chatty. He’d been a United flight attendant before moving to Denver to care for his mother.

At one point he and I were talking in Chinese and my four-year-old niece turned to her dad and said, “Look, two Chinese people are talking.”

That was the most precious thing said about me that day. To her, I am Chinese.

Interesting, isn’t it, that the Chinese woman saw me as non-Chinese and my niece saw me as Chinese based on who they are and what they bring to the table. To the Chinese woman, I am not Chinese and, let’s face it, never will be even though she was delighted that I spoke some Chinese. To my niece, I am not American in the same sense as others in our family.

Indeed, I do contain a multitude. And so do you. Isn’t that one of the delightful parts of being human, of bearing the Imago Dei? To God be the glory for creating beings who can be foreign and Chinese all at once.

What are some of the multitudes you contain?