I wasn’t selected to be one of the ten finalists in the writing contest I’ve mentioned.

This wasn’t a complete surprise as the entry date was August 1st, but around that time GOOD NEWS was announced that the date for the contest had been extended to August 31st.  Leading me to wonder if they hadn’t received either enough submissions or ones they were interested in. Apparently once they received my application (submitted a few days before the first deadline), they didn’t say GOOD NEWS WE’VE GOT A WINNER.

Thanks to my good friend the internet, I started stalking a few of the finalists. One could call it researching or exploring. One would be trying to be mature.

Here was the part that stuck in my craw. Their 16 year-old pregnant bellies. OK, none of the women are 16, but a good number of them (in their words) threw together a proposal just hours before the extended due date and LOOK WHAT GOD HAD DONE! THEY WERE A FINALIST!

I had hoped to win, but knew it was not a given as the industry is hard to break into. Still, I labored for months over my proposal.

Hello, did they just look at a boy and get pregnant? While I have been, metaphorically (people I’m not actually pregnant) watching my caffeine intake, attending on-line seminars, reading books, taking risks and letting you know that I’m trying this, and working diligently on my proposal, what have they been doing? Other women can show you the records of their basal temperature; I can whip out the record of how many words per day I wrote. Sounds a little prodigal/older brother, doesn’t it?

Bottom line, I was annoyed.

I am OK that I didn’t win. I really am. And I’ve asked myself if I’m jealous. Truly, I don’t think that’s it. Annoyance, that, now that fits. At the injustice of it all. Where is the reward for hard work? 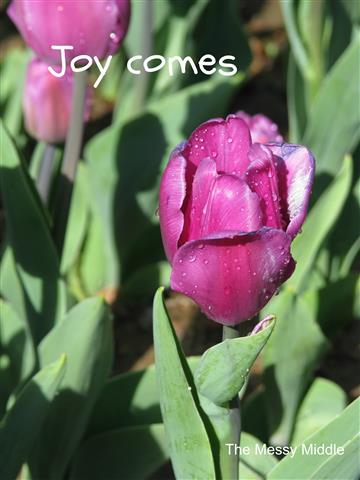 But the truth is I don’t know their stories or what they’ve gone through.

Remember on Facebook when I said I only had 18 likes on the Amy Young living in The Messy Middle page and asked for your help? Saying I’d do a binary happy dance? And you called my bluff helped me reach 150 likes in less than 24 hours allowing the world to be graced by my dancing?

Or when last weekend when, again on FB, I asked for comments to be made on a post that had zero for the sake of the proposal. Once again, within a short time span the comments came and they were not little tossed pity crumbs, they were thoughtful and engaging.

I know you’re praying for me and dreaming and cheering. I tear up thinking of you and am grateful and humbled. You’ve reposted and tweeted and shared and helped grow the email and newsletter subscription lists (which also help proposals). Now if only you’d all become Broncos fans :).

So, this one didn’t work out the way I had envisioned, but I can see that is has worked out. As I’ve reflected on this, I realized that I’m a bit embarrassed that I wasn’t chosen as if being chosen legitimizes me or your faith in me and willingness to keep engaging with me. But what do I have to be embarrassed for? For trying? For investing? For risking? No.

For letting you down? :) … I think you’ll be able to handle this news just fine. Wink.

Next month I’ll head off to the conference I’ve long dreamed of and is part of my new alarm clock setting. I’ve decided to find at least five of the finalists and introduce myself so that they will become human to me and not a caricature of a pregnant teen.

You’ve gone above and beyond for me, what can I do for you?