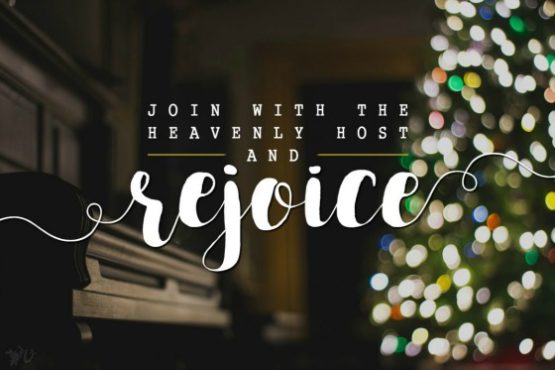 Two scenes from the book of Luke.

Scene one—A field outside of Bethlehem: It’s night. The sheep are dozing, maybe the shepherds are too. When what seems to be out of nowhere, a host of angels appear in the sky with both the most ridiculous and most wonderful and most confusing news to be given in the middle of the night. Then they break into song—as if the whole scene wasn’t disorienting enough—praising God and rejoicing over the good news.

Scene two—A celebration: After returning from a long day of work and asking someone what was going on, he learns the noise comes from huge calf roast for his brother. The man can’t believe his eyes and ears. In shock he refuses to enter. His father lovingly goes to out to his son instead of waiting for him to engage. The father reassures the angry, hurt son’s position and implores him to rejoice “because this brother of yours was dead and is alive again; he was lost and is found.”

What a contrast when it comes to rejoicing. Sometimes rejoicing is grand and easy. It just flows out. Other times, rejoicing seems to smack us in the face with a reality that we have a hard time getting onboard with. Truth be told, I don’t want to get onboard when the the smell of roasting calf adds insult to injury. Still, the Father comes to us and for reasons beyond our understanding and asks us to rejoice.

The messy middle is a place where Luke 2 rejoicers joins with abandon the heavenly host when they sing. But we know that not all of life evokes singing. So, the messy middle is also like Luke 15 where the elder brother felt the freedom in his relationship with his father to say what he was really thinking. I don’t know if in the end he did rejoice, but I do know the heart of the Father was to meet him where he was. That’s the Father’s heart for you too.

In this the third week of Advent, we are reminded to rejoice.

Is this year where the rejoicing is flowing? Or do you feel more like you are outside of a party you have stumbled upon?

(A version of this first appeared on Velvet Ashes and the image was designed by the talented Karen Huber.)