About 12 years ago I was in a pretty horrible traffic accident in Beijing. It was a four car pileup and I was in Unlucky Car Number Three. We slammed into two cars and then the fourth car slammed into us, bending the back seat I was on into a very odd angle. In shock, I thought a rib had punctured my lung. Once I realized no one was going to come and help me or check if I was OK, I knew I had to get out of the car.

All four of the drivers were fighting over who was going to pay what. No one seemed to notice as I stumbled across many lanes of rush hour traffic and did all my shocked brain knew to do – hail another cab and go home. Long story short, when I got home a friend took me to the hospital. She did say, “Don’t take this the wrong way, but I’m so glad it was YOU who was hit and not Erin because she would never have let me photograph the whole process.” 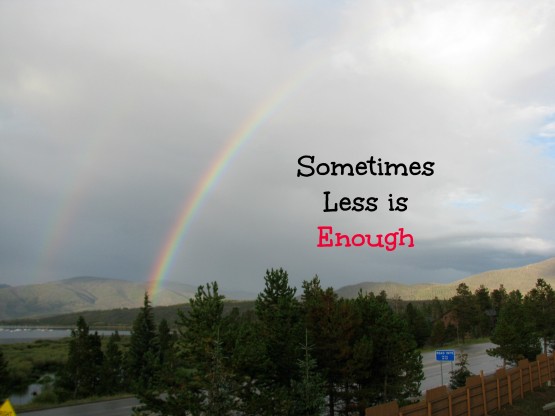 Thus began problems with my neck, back, and wrists. Years of pain and money have been invested to find out I don’t have a wrist problem and do not have carpal tunnel syndrome. No, I have a neck problem that manifests itself in my wrists. I haven’t had a flair-up in over two years and had wondered if I had learned to manage the pain with better posture, exercises for my core, and chiropractors and massage.

I wonder no longer. Which is a not so cute way of saying I’m in discomfort at best and pain at worst most days. Typing is not the complete joy it normally is. Other forms of movement are good for me. Yard work, walking, using movement to try and soothe these muscles in my back that have locked up. I don’t like having to be this intentional about my days. Or think through projects I have for the week and pace myself.

We might hear whispers that less is more, with the emphasis on not less, but more. Or bigger is better. I don’t think God is nearly as taken with less, more, bigger or better as we are. Instead He is a God of enough.

Even though I’m not able to write as much as I would like, these seasons of pain remind me of this truth: sometimes less is enough.

What could you do this week that will be less than normal, but enough?