Y’all know that I read The Bully Pulpit: Theodore Roosevelt, William Taft, and the Golden Age of Journalism by Doris Kearns Goodwin this summer as part of the Summer Reading Challenge. Several years ago, I read her tome on Lincoln, Team of Rivals. Because of the length, I admit to being a bit proud of myself, but it was the subject matter of building and working with a team who could be classified as “rivals” that made it a must-read. You can read my thoughts on Rivals here.

I wondered if I would feel the same about Teddy Roosevelt, William Taft, and those from “the golden age of journalism.” Would this be a must-read?

The short answer is yes. The Bully Pulpit exemplifies what I love about history. History provides a mirror for the current age. If we think now is a hot mess, we are arrogant and a tad ignorant. 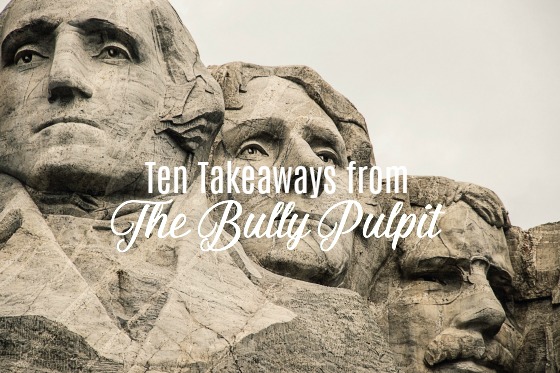 Once again, I am grateful for sitting at the feet of history as I read this page-turner. Generally speaking, you can guess what the book was about, so no surprises there. What I appreciate about Goodwin’s writing is that she honors the complexity of situations and shows enough of the context to help the reader see how various realities interact. Thanks to The Bully Pulpit, I have my own Ten Takeaways from The Bully Pulpit.

Starting with 5 lessons for Every Era:

1. Use the technology of the day. Roosevelt would not start a speech until he knew a stenographer was present. I hadn’t thought of “stenography” as cutting-edge technology, but it was.

2. Know that everyone has an agenda. I don’t mean this is a “the sky is falling!” way, but more of a “we are all wired to care” way. “The policy of the Evening Post is to break down Roosevelt.” (page 257) I am tempted to think there once was a magical era when the media wasn’t biased. While the role of the media in the U.S. ebbs and flows, it’s naïve to think other eras didn’t have their own media issues.

3. Remember that for better or worse, there has always been a relationship between politics and religion. “Roosevelt confided to his newspaper friend Herman Kohlsaat, ‘I am in the worst hole politically I have ever been in my life. The whole Catholic Church is on my back.’” (page 305)

4. Be aware of the relationship between societal changes and mental health. There was a “stunning increase in nervous disorders diagnosed around the turn of the century. Commentators and clinicians cited a number of factors related to the stress of modern civilization: the increased speed of communication facilitated by the telegraph and railroad; the ‘unmelodious’ clamor of city life replacing the ‘rhythmical’ sounds of nature; and the rise of the tabloid press that exploded ‘local horrors’ into national news.” Sounds like today!

5. You will face a Big Issue of the Day. For Roosevelt and Taft it was monopolies and government regulation of industries such as the meat packing industry. Anyone else horrified by The Jungle by Upton Sinclair? I can’t remember if I read The Jungle in high school or college, but I do remember the shock I felt at the working conditions. This book helped to move the hearts of many and paved the way for changes. In the U.S., one of our current Big Issues is health care. But this book reminded me that if it wasn’t health care, it would be something else. Every era has a Big Issue to wrestle with.

Continuing with 3 Lessons for Every Person

6. Value Friendship. Roosevelt and Taft were friends until the election of 1912, and then they weren’t. Reading the disintegration of their friendship was one of the hardest parts to read. Thankfully, seven months before Roosevelt died, they had a chance encounter and mended fences. “Roosevelt confided that at long last they had ‘completely renewed the old friendly relations.’” The Bully Pulpit also highlighted the long-standing friendships between many of the writers for McClure’s Magazine. One lived in Emporia, Kansas and traveled back and forth to NYC. Shout out to Kansas!

7. Be able to laugh at yourself. Roosevelt, in particular, was good at this! “In early December, [Roosevelt] delivered a 500-page manuscript to Putnam’s. Recalling this maiden literary voyage, Roosevelt acknowledged years later that some of the chapters ‘were so dry that they would have made reading a dictionary seem light by comparison.’”

8. They might be strange or unexpected, but be on the lookout for points of connection. Guess what Taft, Roosevelt, and Amy Young have in common? They have all had at least three surgeries on their bottoms for abscesses. And Taft and Young eventually both had fistulas develop that required a surgical solution. I don’t think I’ve ever been in such good “bottom” company before!

And finally, two reminders that parts of history DO show how far we have come.

9. Mentioned above is the rise in “nervous breakdowns.” Want to know a common treatment? “Rest-cure,” which sounds innocent enough. It required patients to remain isolated for weeks or even months at a time, forbidden to read or write, rigidly adhering to a milk-only diet.” No. Thank. You.

10. Think modern politics are crazy? It took 46 ballots and 8 days of voting for Woodrow Wilson to be nominated in 1912! Oh my.

I am so grateful this book has moved from my “To Read” list to my “Read” list! I might not dive into another tome in the next few months, but when I do, what long book would you recommend I read next?

Photo by John Bakator on Unsplash