Mid way through the 31 Reminders project, I wrote Janet:

Janet!!! I’m sorry this is taking so much time :)! Your pictures are amazing, but I feel guilty asking for “all afternoon” — really and truly, if after this batch, you want to say, “hey, that was a great run,” I respect that.

But also know this isn’t meant to be a China, in direct, “please stop” — it’s an American, “I’m embarrassed that I’ve asked too much.” 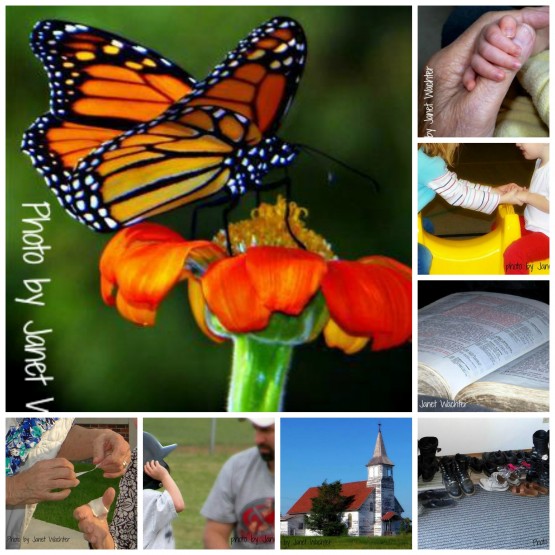 I’m grateful for Janet’s contributions as they pointed to daily, tangible ways Eden is with us. Her pictures inspired me to see the world differently. Overall I’ve been a traditionalist when it comes to taking pictures. People, food, and flowers. The big three. Janet’s photos remind me of the sacred in the ordinary. The precious in the mundane. A little girl wearing unmatching shoes. A loaf of bread being torn. A bride with her head on the shoulder of her groom.

I find myself looking for shots as I walk through stores or am out in public. Shots for my invisible camera. Which is to say, I’m tuning in to the visual world around me more and catching glimpses of Eden.

I have two favorite pictures. One is the gorgeous white flower from purity. But when my mind bounces around the 30 images, it lands on the pile of shoes for acceptance. And what is acceptance if not feeling at home, walking around in your socks?!

Janet, thank you for putting visuals to words. For creating hooks from which to hang these ideas. I hope you don’t dread seeing my name in your inbox :).

Which image will stick with you? Any words for Janet on how her photos influenced you?

Just a reminder that everyone who comments this week will be added to a drawing  on Saturday for a set of Holly’s cards (your choice). Following Janet and Holly’s generosity, every comment will be an entry. If you wonder what we’re up to this week, we’re sitting on benches :).