During the month of October I heard the calming Emily Freeman speak at a writer’s conference. She shared how the idea of “building a platform” was intimidating and exhausting and crazy making (I added the last one). If you’ve not heard of a platform, in essence, it is the place from which you stand up and share your ideas and yourself. For some, facebook is their platform, for others, it might be Pinterest, their local MOPS group, a blog, or the kids in their carpool or kitchen. Size doesn’t really matter unless you are asked by potential agents, “So, how big is your platform?”

In Emily’s cal-de-sac  there is a patch of grass where parents gather to chat while their kids play. Tired of standing, Emily and her husband decided to buy a bench and placed it in the grassy area. It was a simple enough decision. 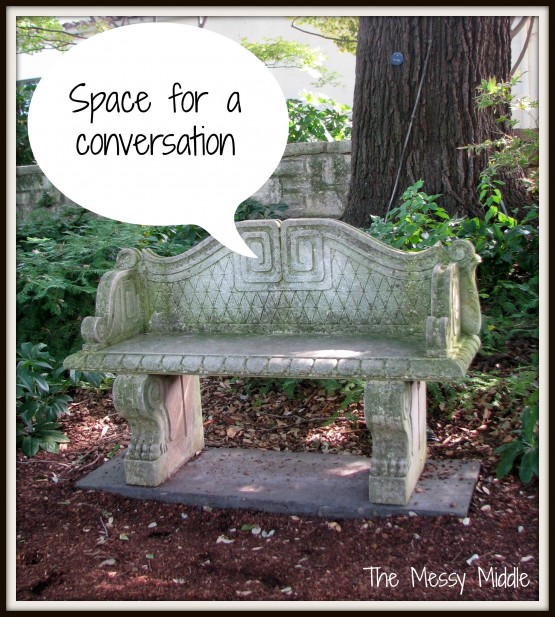 The Messy Middle is my way to create space for conversations. I love it when you leave comments (and I know many of you are not commenters and that’s fine!). When you comment on each other’s comments and conversation starts, I am humbled that this little bench has been used to connect and encourage and challenge people. And even if the conversation doesn’t happen here, my desire is for these writings to be a spring board for conversations you have with people in your daily lives. Benches aren’t meant for the masses.

This week, I’d like to have a conversation about our 31 Reminders from Eden. It’s  tempting to race on to the next thing, freaking out that you’ve had enough of Eden and “my” numbers will drop this week. But that is fear and platform speaking.

So, we’re going to have three (potential, who knows where this will go!) conversations.

1.  The photos used. Janet Watcher brought a visual image to the series I simply could not. We’ll talk about the images.

2. The reminders. Which reminders moved you? Challenged you? You disagree with?

3. The theme. How has this series impacted your thinking and your soul?

One of the great joys of this project was having  Janet Watcher and Holly Beals add to the bench. Janet with her photos and Holly by designing the button used. Holly designs amazing art, including cards! If you don’t know, I’m kind of a card addict :). Everyone who comments this week will be added to a drawing  on Saturday for a set of your choice of Holly’s cards. And as a model of their generosity, every comment will be an entry.

I look forward to our conversations :). Amy