Sunday would be my dad’s 75th birthday. 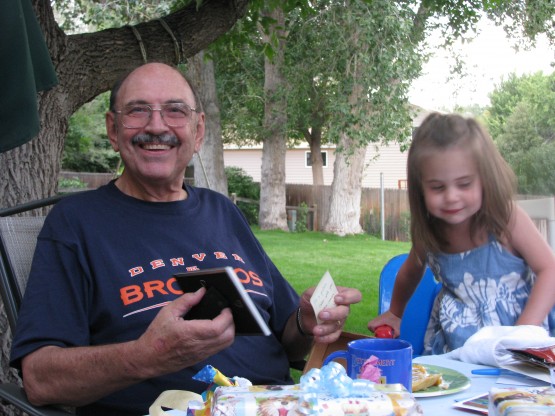 I was in the States in 2008 because of the Beijing Olympics and was able to be with the Family on Dad’s birthday. Looking back at pictures I had forgotten that was the day #4 was dedicated and we went out for Dim Sum for lunch. Oh, and Dad had present helpers :)

Given that his parents lived to 83 and 92 and my mom’s parents lived to 95 and 101, 74 feels like Sesame Street’s “One of these things is not like the other, one of these things just doesn’t belong.” But then we remember he had Hepatisis C for 30 long years and suddenly 74 looks like a gift so many families weren’t given. He was diagnosed when Elizabeth was pregnant with their first and it felt like a cruel joke to him.  Dad wondered and lamented if he’d ever get to know his grandchildren. One of the great joys of the latter years of his life was getting to know and love and enjoy those girls.

And we got 13 more years to lean hard into the intentionality of regular, ordinary, glorious life. Playing games, making phone calls, eating meals, annoying each other, vacationing together, raking endless leaves in the fall (maybe some frustrated words were exchanged with The Universe given the nature of trees and leaves and wind and timing. Did we, or did we not JUST FINISH RAKING, why is the wind blowing more leaves?). Celebrating holidays and accomplishments. Making waffles and waffle dances. Bearing one another’s burdens.

Until it was time to lean over him in that hospital, bless him, and tell him it was time for him to turn from us and go into the land where he would never again be sick.

So these days we are grateful and sad. Sad and grateful. We learned at the memorial service Dad liked to carry a 50 dollar bill “in case of emergencies.” He was more likely to give it away because there were always people in more need of that 50 than him. That’s the kind of man he was, prepared but willing to share. And to just do it, without fanfare. We didn’t know this was his thing.

Legacies too often are associated with doing something BIG – HUGE – SPECTACULAR! Do you see what a lie this is? How counter-cultural to the Kingdom of God it is? But it’s the message that is thrown at us a hundred times a day in as many forms. I will say it again. LIE! It is a lie that only the big matters.

Legacies are more like breadcrumbs dropped throughout a life. Some will be known in the here and now, others will be discovered, like the $50 one, later. Know this, these breadcrumbs matter and they do leave a legacy as they lead people down a path. Where are you leading people?

In honor of his birthday, please comment on what you’d do with 50 dollars. It could be an organization or a situation you know of. Either way. I trust you :). I’d love to see the comments flooded with all of the good that is going on in or could go on in the world. All of the ways we are reaching out to each other and finding ways to walk with one another, all of the ways we move towards each other instead of away.

I’ll randomly select one of your comments on Monday and the “50 just in case” blessing can continue in honor of the man who started it.

We love you Dad, and are living out your legacy. And on Sunday we’ll eat some peach pie (or at least talk about it!) and think of other birthdays!