This is one of my personal Top 10 favorite posts because it embodies life in the messy middle. Three years have passed since I first published it and I’d like to do a follow-up interview with my sister. What should I ask?

Several years ago my sister Elizabeth saw a homeless man in her suburban neighborhood.  And saw him again and again until one day she asked his name: Donovan.

Her life, and ours as her family members, has been enriched by this relationship. But it has also been exasperating, challenging, confusing, and stretching, I asked her if she’d be willing to share some of her experience and she humored me. I bring you my sister, Elizabeth.

First of all, as your sister, I want to say our family is richer because you followed the nudging of the Spirit. I know you have grown to  care for Donovan, but it’s not all been easy. What are some of the challenges?

He is a difficult man to have around—never stops talking, and because of the girls {they have four daughters}, I feel like I need to be on the same floor, so I can’t go upstairs and do anything. He has a difficult past and what has to be brain damage, making it tough to follow his train of thought. It’s never convenient to have him here. I’m annoyed that he doesn’t get a job, but I understand why he doesn’t get a job (so he doesn’t lose the benefits he worked hard to get).

And I never thought about what my neighbors would think about me inviting a homeless man into our neighborhood. They have been supportive, at least outwardly. That was actually pretty funny when, twice, people warned me that a man with a shopping cart was hanging around my house. Let’s just say that their jaws dropped a little when I had to tell them, “Um, yeah, when you see the cart parked out here, it means he’s probably inside my house.”  Kinda liked that shock value. 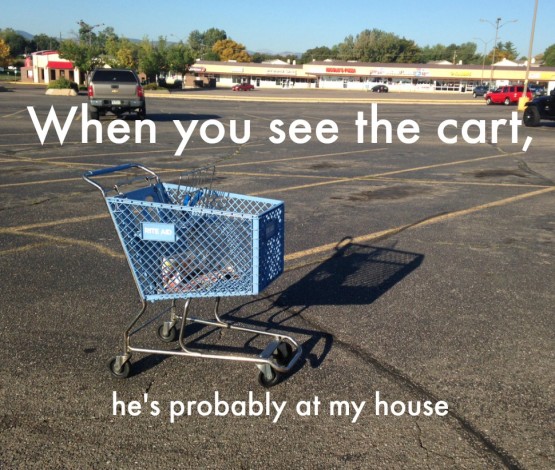 What are some of the ways knowing Donovan has enriched your family’s life?

He’s gone on the men’s retreat with Del. He’s been out to dinner with us. He’s sat in church a few times with us. We’ve given him many rides to Walmart. I had him set the table once, and he had No Idea what to do. Many people have been exposed to him eating dinner with us all.  His birthday is Monday, so he’s going to come over so we can take him out to celebrate. And it just goes to show how disconnected people are with the idea of being friends with a homeless person when they say, as someone did last week, “You mean he just stops by??”  Well, he can’t exactly call to schedule coffee.

I know there’s been some awkwardness too.

I feel so dishonest not answering the door when I know he’s there, but some days I’m just not up to it.  I especially don’t want to coach the girls to be dishonest, so I haven’t done this when they are aware.  Another awkward time, he stopped was so agitated that we thought he was high and hustled him right out the door. (That was the night of a near-by gunshot, so he claims that’s why he was upset. Could be.) Another time, I had to feed him sandwiches on the front porch because I had told him that I wouldn’t let him in when other kids were over, not knowing how their parents would feel.  I think we both felt pretty awkward that day. And I’ve admitted to friends that it’s just plain uncomfortable being close to such poverty.

Yeah, I get that. I feel that too.

I will say that one day a few months ago, he showed up clean-shaven (a first!), with a haircut, and cleanly dressed. I didn’t recognize him when I looked through the peep hole in our door. It was pretty unnerving to see him looking so NORMAL Frankly, it rocked my view of him. I thought I knew how to think and feel towards him when he was hairy and dirty, but I wasn’t sure what to do with my thoughts when he showed up looking like he just came back from the office. If we hadn’t had a routine of me feeding him, I wouldn’t have thought to offer, because he looked like he didn’t need it.

That day really made me think about how our perceptions of people really affect the way we relate with them.

What about the girls?

Number One (age 11) usually vanishes when he appears; that’s just her–introvert escaping to read in her bedroom–but it might also be her age.  Number Three (age 7) seems comfortable but interacts little with him; she is also an introvert.  Number Two (age 9) though, readily talks to him and even asks to sit by him (which makes me proud, given her keen sense of smell and his ‘ripeness’, depending on the day).  And Number Four (almost 5), also an extrovert, is happy to swirl around or sit at the table and talk to him when he talks to her.

What are some benefits to the girls?

Being friends with Donovan has stretched me, and it has stretched them. There has been nothing—nothing!—that we have ever done that has given us more opportunity to show them that God calls us to love people, and He doesn’t promise that it will always be convenient or fun.

What are a couple of good memories with Donovan?

Early in our friendship, he was waiting for dinner to start, and it was an evening where we had at least 11 people for dinner.  Chaos swirled, and I looked over and Number Two was sitting with him on the couch reading to him a Dr. Seuss book. Because, to her, that Just. Made. Sense.

I know a lot of his friends smoke pot, and learned recently that he sometimes (often??) joins them.  During the time I’ve known him, multiple friends of his have been arrested, one died, and another committed suicide. He said to me one day, as the girls rough-housed in the next room, “I like to come here because it’s so calm.” I must’ve given him a look, because the noise of them at that moment was anything but soothing, and he quickly said, “Oh, I know they can be loud, but it’s so CALM here.”  Proof of what I suspected—that he’s here for community more than food.

One of my favorite memories with Donovan was when I was in the States last year for Christmas and he came with all of us to the Christmas Eve service. At the dinner table afterwards Number Two wanted to sit between us. Donovan on one side and an out-of-town auntie on the other. That picture of her with the two of us on either side, that is one of the last things I hope passes through my mind before I die. It’s such a picture of love.

Would you do it again if I knew then where this road was going to lead?

The reality is, probably not. I’m not usually a bold person. Had I known where my introducing myself was going to lead, I would have totally chickened out before I ever got started. And that would be my loss. There is definite satisfaction in doing what God has asked you to do.

I do like that I know Donovan likes cantaloupe, mayonnaise on his sandwiches (no lettuce; too hard to chew with no bottom teeth), and drinks milk by the gallons when given an opportunity. You should know these things about your friends.

Elizabeth, thanks for sharing some of the scribbling you and Donovan and Del and the girls have been making. What I love is that you haven’t “gone out” to do it, you’ve incorporated scribbling into your every day, complex, life. What I also love, is you. Amy

The relationship with Donovan continues and the girls are even older now, what questions do you have for Elizabeth? Or me? Some day I’d like to interview Donovan, too.