This post reminds me of my first “research” paper in sixth grade. We were learning about using sources to enhance our ideas. Want to know my subject? Prepare to laugh given how life and interests turned out.

Mexican food. We had a student teacher and I recall him talking with me, wondering if I had enough sources and if I needed a more concrete subject. I was the only student writing about a food group. When I explained my mom’s cookbook collection I convinced him to let me try. 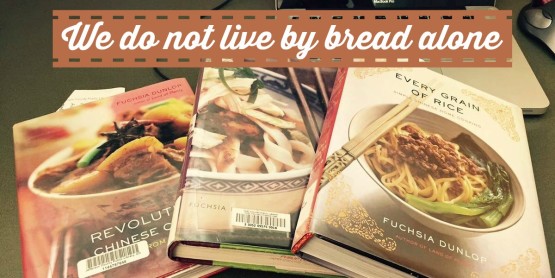 Last month I shared three reasons you should read the Chinese food memoir Shark’s Fin and Sichuan Pepper: A Sweet-sour Memoir of Eating in China by Fuchsia Dunlop. It turns out she’s also written three cookbooks: Land of Plenty: A Treasury of Authentic Sichuan Cooking (2003), Revolutionary Chinese Cookbook: Recipes from Hunan Province (2007), and most recently Every Grain of Rice: Simple Chinese Home Cooking (2013).

Though I am a self-proclaimed non-cook (in any culture), these books are a must explore because they are more than cookbooks. They are part cultural informant, part memoir, and part cookbook.

In each book, Dunlop goes into delicious details on food as it relates to culture, both at the start of the book, at the start of each section, and, if you can believe it, with almost every recipe.

For instance, on the recipe for Mr. Lai’s Glutinous Rice Balls With Sesame Stuffing (Lai Tang Yuan) she shares:

In 1894, a young man named Lai Yuanxin traveled from his native town to Chengdu, where he took up a place as an apprentice in a restaurant. Sadly, it wasn’t long before he fell out with his boss and lost his job. Stuck with no means to support himself, he borrowed money from a cousin, bought a bamboo shoulder pole and a few cooking utensils, and started selling glutinous rice dumplings on the streets. After making a living this way for many years, he was able to open a shop on Zongfu Street in the center of Chengdu. Mr. Lai’s unusually good tang yuan are now celebrated all over China. (Land of Plenty: A Treasury of Authentic Sichuan Cooking)

It goes on, and this is but one recipe out of three rather detailed books!

Part of the beauty of food in China, is the possibility each one of us has to join the grand culinary story. While every dish may have a history, we each have our own personal history and experience of it. Who doesn’t have memories tied to restaurants, dishes, or cooking experiences?

Dunlop’s books are not merely about food, but about her personal experience with the food. The recipe for Stir-Fried Bitter Melon with Chinese Chives (Jiu Cai Chao Ku Gua) comes with this story:

By a series of strange coincidences, within twenty-four hours of arriving in Mao Zedong’s home village, Shaoshan, I was invited out to lunch by his nephew Mao Anping, now an official in the local government. Mao the younger is a laid-back, affable, chain-smoking sixty-year-old who is blasé about the attention paid to him as one of the Chairman’s closest surviving relatives. He brushes aside any suggestion that he looks like his legendary uncle, but, seen in profile or from behind, the resemblance is quite unnerving. . . . This is his recipe for bitter melon, a fresh and radiant stir-fry of jade-green melon, dark green chives, and brilliant scarlet chili. (Revolutionary Chinese Cookbook: Recipes from Hunan Province)

Here we begin to get out of my depth, but I believe those of you who are interested in these cookbooks because you actually want to cook food and not just read about it will not be disappointed. Each book is sprinkled with food preparation information and skill development, in addition to recipes. She includes cooking methods, what is in a Sichuan pantry, a Hunan pantry, and the basics of a Chinese pantry. It turns out I enjoyed reading about all of the different chopping techniques and the “useful shapes” you can make.

Pictures are a plenty and can either make you hungry, nostalgic, or act as a guide. In Every Grain of Rice: Simple Chinese Home Cooking, Dunlop shares how to plan a Chinese meal, what to do after the meal, a short section on drinks, and a most helpful “menu ideas” for two, four, or six people. Each menu suggestion comes with four meat and four vegetarian menus.

While reading these books did not turn me into a cook, it did open my eyes further to this vital part of the Chinese world that it would be easy to think I already knew. It also makes me wonder whom I could give them to because he or she would actually cook for me!

If you are a cook, you’ll enjoy these books. If you’re not, buy them for someone who is and enjoy reading them after they fix you a meal.

Do you remember your first research paper? Do you read cookbooks? Normally I don’t, to be honest, but I know lots of people do.

A version of this was first in From the West Courtyard.