This week at Velvet Ashes our theme was “leaving” — life is fill with it, isn’t it? It was a powerful week (you can see Monday’s, Wednesday’s and Thursday’s posts) below is the final post of the week (and written by me). 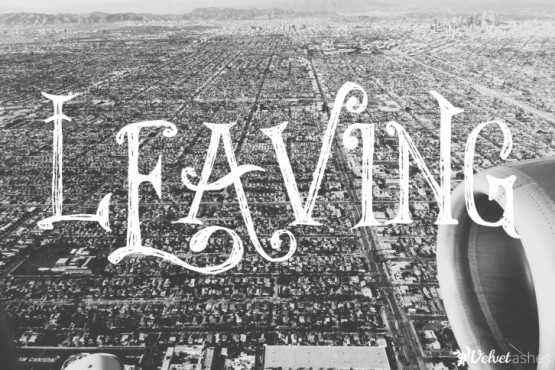 Here we are again. Friends having a conversation.

There is a lull. At first it’s comfortable, but then it grows and we both know something of substance needs to be said. But who will be the first to say it out loud?

I look away because the moment is poignant and heavy and precious. I don’t want to miss it, but I hate the weight of it.

You’ve probably sensed it this week too. The dance between guilt and shame and hope and longing and sadness when it comes to this topic of leaving and being left.

In the posts and comments we’ve heard echoes of

I’ve known for weeks I’d be writing this post. God and I have gone around and around about what to say. It hasn’t been like having a quaint cup of tea and scones while we chat; in the best sense, I feel like I’ve been mud wrestling with God. I really have so much to say, it might take a book. Instead of having this be a confusing post because I try to shove too much in, I’m going to share one thing God said in relation to leaving.

Leaving is your birthright.

This week, I’ve been struck by how much guilt and angst and judgment we feel around leaving and being left. It took all I could when a close friend told me she was leaving the field not to grab her shoulders and scream, How can you leave me?! Who will get my jokes? Who will go to Pilates and share in my quirky stories? Who will know why asking about trains is funny? How can you do this to me?

But I didn’t. “Yes, yes, I can see God leading.” I could. And. I wanted to ask God why the high-ho he didn’t make it better for her.

Leaving is your birthright.

In an instant I had to sit back, take a breather, wipe the mud off my brow, and let that settle in.

Look at some of the leaving woven throughout the Bible. Loot at the way it informs and shapes us as a people. Look for where your story intersects theirs.

One of the greatest gifts the Bible offers is the ways in which it mirrors who we are. We are people who leave. Who leave in response to calling and crisis. We leave because of family and love and politics. We leave at times against our wills and at times brimming with anticipation. We leave early in life, in the middle of our story, and when our bones are tired. We are described as wanderers and sojourners.

God, in his infinite mercy, kindness, and love has woven leavers, stayers, and those who were left throughout his word. The bible doesn’t just tell us who God is, it tells us also who we are. Apparently he doesn’t see people as long- or short-termers. He doesn’t see leavers and stayers. We are described as beloved children.

We see people having crazy (and at times sinful) responses to leaving. Just take one of the above scenarios and for a moment place yourself in it and imagine the conversations! Girl, we get it, don’t we. We are described as people of faith.

Yes, it is hard and tumultuous. As Danielle said, it’s like concentrated lemonade. It cuts to the core of our identity. But what God wants us to know is he cuts deeper. He gets it. But more than understanding us, He loves us. And someday, someday, staying will be our birthright. Staying with God. Staying in our perfected personalities. Staying with those we love. Staying in safety and freedom and pure environments. But for now. For now.

Wow, there’s more in the Bible about leaving than I thought. How does the word “birthright” change all of the leaving in life?