In preparation to visit my friend Lisa, she found several fun options for us through groupons. One day I’d get an email along the lines of Hey would you like to go whale watching? And the next day the question might be would you like to rent motor scooters and ride through Lancaster, PA looking at Amish?

The answer to both was, of course! But we knew we couldn’t say yes to all of the fun things we wanted to do. I remember responding along the lines of “I’d love to do both, but if I have to choose, what does it say about me that I want to ride a scooter and look at Amish? Doesn’t that seem a bit voyeuristic and somehow just … wrong.” 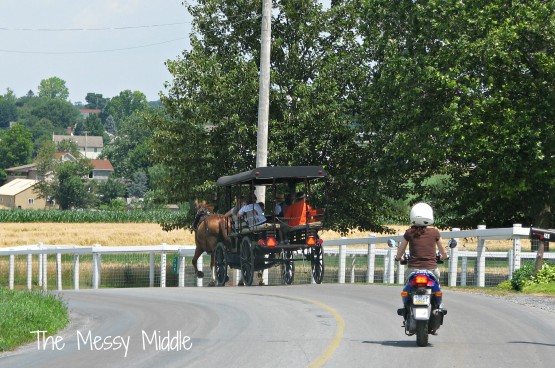 We got over the awkwardness and had a great day

Like many of us English (anyone non-Amish), I have a strange fascination with the Amish. And after our day in Lancaster, I also had a major sugar high! We scooted from stand to stand enjoying whoopie-pies (oh my word, Jesus could greet me with one of those), homemade lemonade, ice cream, and pretzels. After our first stand we decided to forego “sensible eating” and just enjoy. And we did! It was my first and only time to truly interact with an Amish person and to in small, very small, ways break down some of the stereotypes and see them as people and not just “the Amish.” So when I was visiting a friend in the hospital after she had given birth and I saw the book Growing up Amish by Ira Wagler, I was tacky enough to ask a new mother if I could borrow it when she was done.

Thankfully, though a mother of two young’uns, she finished the book lickity split and gave it to me Wednesday when her son stopped by to trick-or-treat. I handed him a piece of candy and she handed me a book. Best. Trade. Ever.

If you have ever had a fascination with the Amish (or really, a passing curiosity), get this book and then hope for weird weather (in my case two days of rain in Beijing, a land known for being a desert). While this isn’t going to become classic literature or a book you need to read repeatedly, it is a peek into broad world of the Amish.

Ira was an active, albeit restless, member until he left for a fourth and final time when he was 25. He paints and fair picture without poking fun needlessly, elevating himself, or mocking those who stay. Instead, it is a look at someone who wrestles with wanting to be part of a community in which he never felt fully himself. In the end he found the gracious love of God that enabled him to move beyond the truth he had been taught about salvation.

What have you been reading recently? Anybody else eaten a whoopie pie? Am I right or what?!