The LORD detests the use of dishonest scales,
but he delights in accurate weights.
Solomon (Proverb)

The feast is supposed to sustain the fast,
but we go back for seconds and thirds and fourths
stuffed to the brim and fat with inactivity.
Jen Hatmaker

But it’s much easier to read a proverb than to live it. Look again at the first one, are there any words you skipped over? If you’re like me, you read ‘detests,’ but you didn’t absorb it. Let me say it again: Detests. Not “the LORD is disappointed” or “disturbed.” Detests.

What do dishonest scales look like in our lives? One answer comes in chapters five and six of Jen Hatmaker’s 7: An Experimental Mutiny Against Excess

. She devoted seven month to address, you got it, seven areas of excess. Months five and six find her wrestling with waste and spending. Nothing any of us can relate to, Poor Jen. {Cue the music the points out the disconnect between me and reality!}

In trying to live a less wasteful life she and her family adopted seven greener habits, one of which was partnering with KP Projects. KP Projects will come to your home, plant a garden, and give you half of the produce while helping formerly homeless transition off the streets. Is that not the coolest thing you have heard of today? I share it to show that there are more options out there for creative solutions (even partial solutions) to complex problems than I think. If China is a bit too heavy on only sharing good news, we in the West have gone the other direction and are obsessed with the bad.

The Hatmaker family limited their spending to seven places for a month and used the language of “fasting” to describe this month. The poetic practicality got to me. I’ll be honest that in China I don’t shop at that many places or eat at that many restaurants; I “fast” from being around my family, live sports, convenient Western food, and having my own car. But when I read about the rhythms of feasting and fasting, I know that I don’t fast in ways that are forming my spirit. Let’s be honest, I “fast” because I have to, not as an act of obedience that will lead to greater reflection of Christ.

I read these chapters and then went on a weekend trip to Qingdao (of Qingdao Beer, strong German influence) with a friend who is researching church bells in China. In March she “happened” on a most inspiring story (read about it here). Sunday morning found us sitting in a church that was designed by a Russian, founded  in 1938 in a Japanese controlled area of a Chinese city, holding a German bell dating 1883, attended by Chinese brothers and sisters. Five minutes before the service started they rang their bell for about two minutes. All was quiet in the sanctuary as we prepared to worship. 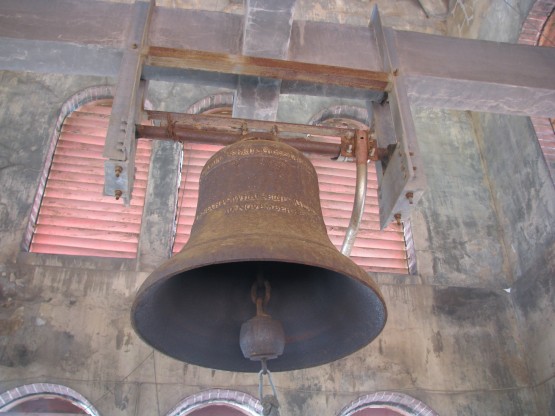 Do you feel the weight of that place? The history? The enormity of the moment? Can you hear the bell?

It was not merely a call to worship, but a call to live the stories we were meant to live. We were not meant to be wasteful, selfish people who spend like we are in Vegas, extended beyond our means. No, we are the children of the LORD who wants us to feast, oh yes! He is generous and created a wonderful world. But we must also have times of fasting of helping the poor, the widows, those trapped in injustice.

Hear the bell as a call to live a life reflecting feasting and fasting. The clapper hitting one side and then the next. Feast, fast, feast, fast.