I am too close to my trip to Angkor Wat to say anything of substance other than this:

1. There is value in visiting a place of scale when coming up to a major life transition. I know that going to Angkor Wat might not work for everyone, but there are plenty of options. The Grand Canyon, Yellowstone National Park, different ruins around Europe, and if you are blessed, yes, come to Angkor Wat. Being in real ruins (and not the metaphorical ones we can make our lives to be) or some where so VAST words escape helps to put one’s life in a healthy perspective.

2. Um, Ankgor Wat has blown all sense of scale OUT. THE. WINDOW. Seriously.

Let me give you a short run down on Angkor Wat and then on to some pictures. Angkor Wat is technically one gigantic temple (first Hindu, started in the 1100’s and then became Buddhist), but it has become synonymous for the area and the many, many wats/temples.  Riddle me this, when it was excavated, archaeologists found no signs of human dwellings, utensils, weapons, or other signs of human life.

Chunmei and I did two days of touring. On the first day we did the short loop and saw about seven wats. On the second day we got up before dawn to see the sunrise and then did the long loop, also seeing around seven wats. And there were more we could have seen, as in plenty. 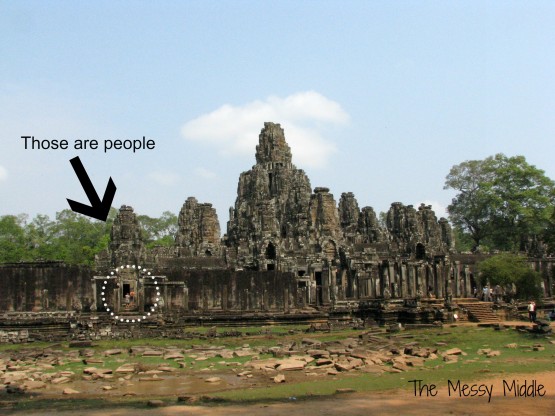 Though not technically Angkor Wat, this gives an over arching view 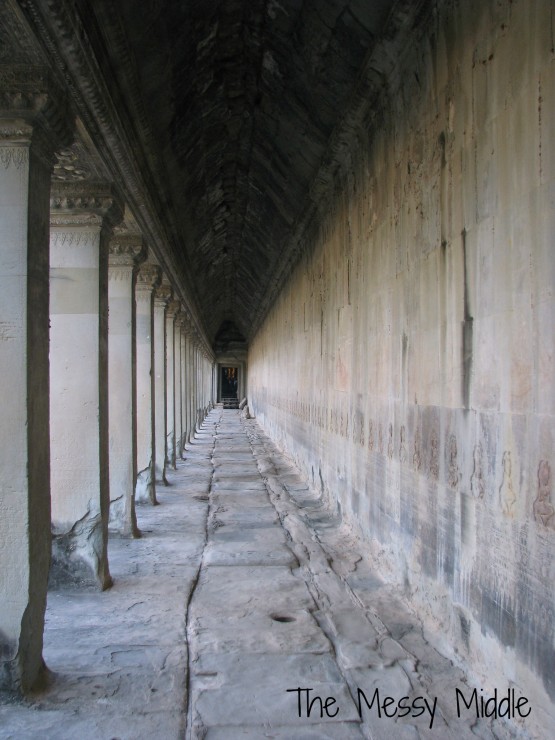 This is at Angkor Wat and is deceptively devoid of people

At Angkor Wat there are three levels: hell, earth, and heaven. The size of the stairs up to hell are large, smaller ones up to earth, and smallest to heaven. While easy to grasp, it just made me sad to think of all the people striving to get up to heaven when there is Someone ready and willing to carry them up there on his scarred feet. 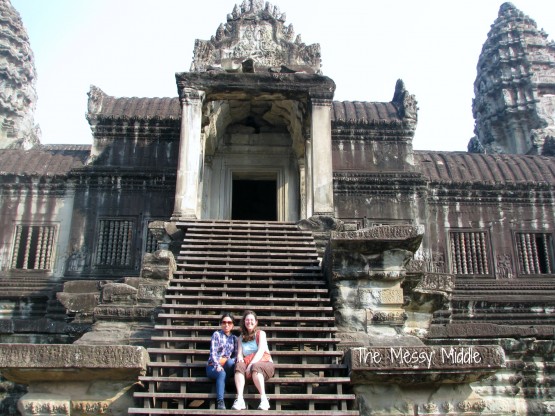 Between ‘hell’ and ‘earth’ with Chunmei. We are on a wooden staircase that’s been made larger then the original (and now ruined) staircase 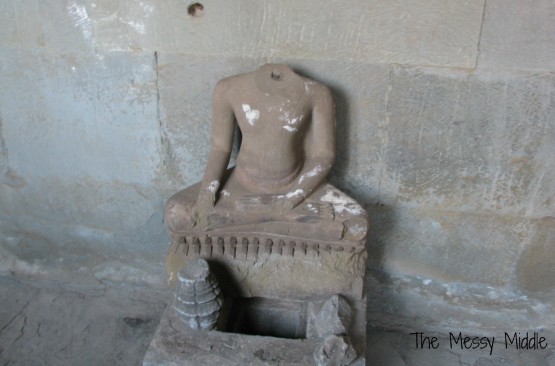 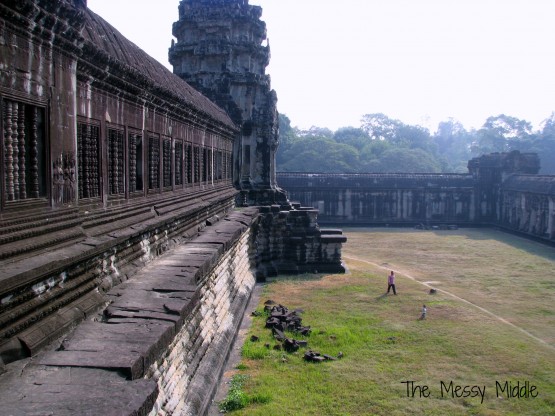 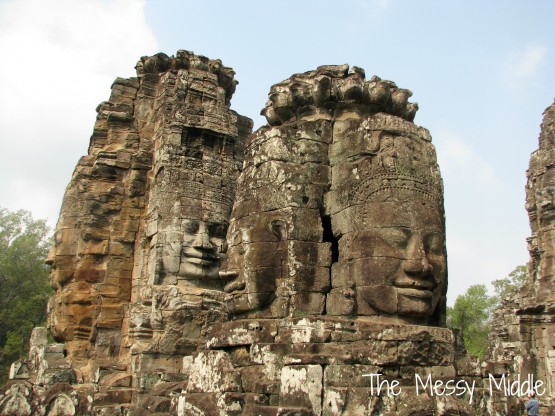 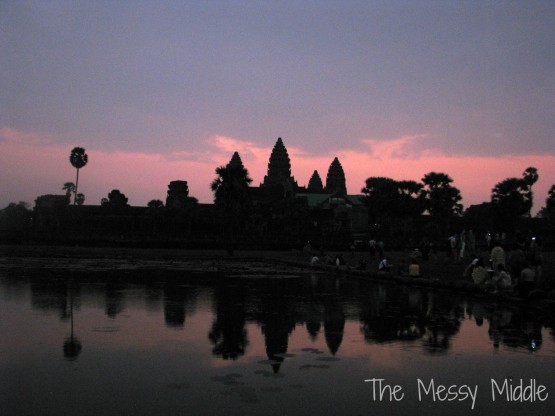 Thanks for the suggestions to see it at sunrise! 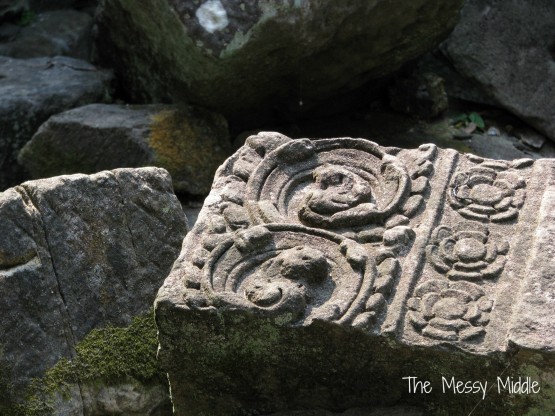 It was staggering to consider the amount of material used

At one stop our Tuk-Tuk driver dropped us off and told us to walk to the right. We walked for a bit and came up to a stone gateway and thought “that’s it?!” having grown accustomed to IMPRESSIVE structures. But we passed on through it and kept walking through the woods. In the distance we saw this … 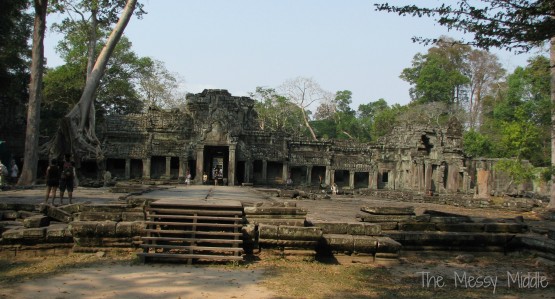 Had C.S. Lewis been to Angkor Wat?

We became Lucy, Susan, Peter and Edmund when they stumbled on the ruins of Cair Paravel in The Lion, The Witch, and The Wardrobe. If you kept walking straight and went through that small gate you’d enter on arm of a gigantic “+” with a stupa in the middle, where the two arms cross. From the doorway, the stuppa is a good eight minute walk.

And for the last photo in this brief tour … 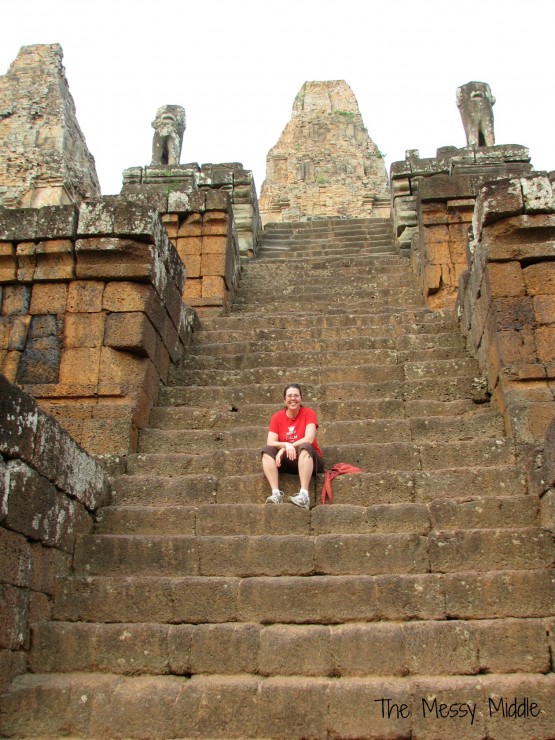 This is at one of the so-called smaller wats

This place, I tell you, it’s messed with my sense of scale from amount of languages heard, to size of one temple, to the number of temples, to the number of stairs climbed in day. Thanks for your prayers as the next leg has begun — being in Chiang Mai, Thailand for two weeks, complete with many tears, goodbyes, and jolly remembering.