I had the privilege of being the commencement speaker for a high school graduation. About 150 gathered to see the home schoolers in Beijing graduate and this year there was a small, but mighty group of impressive young women. The next three days I’ll share what I said. (I wanted to be sure I wasn’t parched but didn’t mean for the water bottle to feature so prominently!) 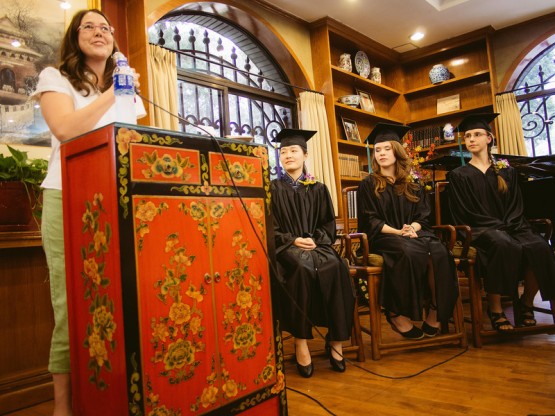 The words we all long to hear :). You made it! Congratulations to you on being here … your high school graduation. You three are the vertex, the focal point, of this gathering as most of us fall into two categories:

1. Those younger than you who look to you and see the hope that lies before them if they keep studying  … “Look at Sarah, Anne, and Isabel! Someday that will be me.”

2. And those of us who once were where you are – our own high school graduation and we are (even now as I’m speaking) remembering our graduations and all of the years that have passed. Right now I’m here before you in 2013 fashionable clothes …

but I’m also in a gold gown, sitting in Red Rocks Amphitheater wearing a dress that rocked the face off of the 80s and have flippy big bangs that also point to the 80s :) — and like others in this gathering, I wonder where the years have gone and am amazed at the ways God has used my childhood and high school to prepare me for life’s journey.

But today is your day!

We are in the unusual position of having only females graduating  — and having been given this unique opportunity,

I  want to look at women of the faith and focus on a few to see the ways in which an earlier part of her life prepared her the work God had for her.

If next year you are asked the foolish question, “is there a place for women in the Christian faith” you could answer them like this:

The woman caught in adultery

Woman with the chronic bleeding problem

The Samaritan woman at the well

And the cast of women characters in Proverbs: the virtuous woman, the foolish woman, the excellent wife, the shaming wife, Lady Wisdom, and Lady Folly.

Five women are listed in Jesus genealogy and four of them, like you, were foreigners.

In the bible we see named and unnamed women, there are wives, daughters, sisters, rivals, friends, singles, disciples, an apostle, those in leadership, those who lived in obscurity, we find foreigners, those who are loved, those who are unloved, women with ailment, those with many children, and other who were barren, we have a pregnant teen, a whole range of mothers, a shepherdess, merchants, one really good with a tent peg, prophets, those who served both inside and outside the home, those who were told to be silent, there are mistresses, prostitutes, great marital faithfulness, and those who were loved deeply by Jesus.

Sadly our gender, like Adam, was a part of bringing sin into this world, but as Tertullian wrote, “Eve had believed the serpent; Mary believed Gabriel. That which the one destroyed by believing, the other, by believing, set straight.”

Ours is a faith steeped rich with women.

And before me are three who will join their ranks. Sarah, Anne, and Isabel .

Who did I forget in my list? What hair style or outfit did you rock at your graduation?