Guess what? I can drive. 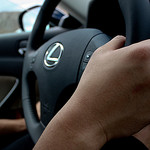 I realize this is not really a shocking announcement or very interesting, in-and-of itself.

But as someone who has lived in China for many years, most of the North Americans I have met overseas have never seen me drive (or seen me in America, for that matter).

A few weeks ago a small group of us who know each other from China met up in the Seattle airport to attend a wedding. We were going to participate in one of the great American rituals to get there: a road-trip. We fit in two cars and I was the driver in the lead car.

These people who have known me for years and seen me in many contexts got to see a side of me they hadn’t – it was rather “both/and” – both normal and odd. Though we all know each other can drive, of course we can(!), we never see it. Here we were, participating in a so-very-American activity (road-tripping), when we know each other from such a different context (trains, buses, and crazy taxis).

Me driving people I’ve ridden in crowded taxis going down the wrong side of the road. Being followed in another car by a friend who can … drive! I’ve never seen him in the US and here we were whipping down some highway.  I know he can drive, but it’s still weird to see it. A fellow road-trippers put the following up on Facebook:

“So here’s what I’ve recently learned about fellow teammates as I’ve traveled with them States-side: Amy Young is a speed demon, JW likes to comment on the make and model of every car we see, AG is overwhelmed when making coffee & tea choices, KM becomes sassier, RW is overjoyed at reading American Idol magazine articles, and KB feels ‘complete’ now that her Siping friends are in Washington to share her special day.”

I’m not the only one with skills in one area that aren’t tapped into/seen in some contexts. In the comment section, share something that those in your daily life might know about you, but haven’t gotten to experience.  Do tell!

{p.s. Want to be sure you don’t miss a post? It’s easy to subscribe (button on the left), there’s always room for one more in The Messy Middle}