I am practicing a new spiritual discipline of really seeing the signs around me. Yes, yes, yes. We have a ridiculous amount of visual images bombarding us so we can’t pay attention to everything. But I believe that ours is a God who speaks in the mundane, the ordinary, the obvious. The problem is that I’d rather be spoken to in the mysterious, the quiet, the sacred. By which I mean, the special.

In the spring I wrote about a sign I see in my gym. You in the fitness: not your native tongue. That sign has put me on a quest in which I am retraining myself to see them as just that … signs.

These signs in poor English are triggers for me. A moment to pause and ask myself how I resemble that message. In them I see a reflection of how I can sound as I’m learning to respeak my native tongue. As I have slowed down, I see how very un-Eden like every nook and cranny can be. 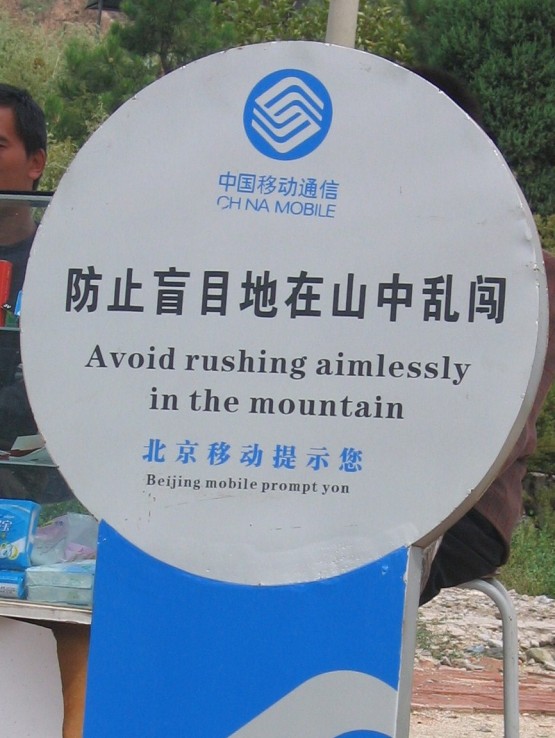 Avoid. OK, that means there is a choice; as much as I think I HAVE to do, say or think a certain way in a situation. I don’t. Period.

Rushing. But isn’t rushing a nice way of saying being intentional and not wasting time. It is if you speak Eden lost. Eden lost whispers that if I don’t rush I might miss out on something. It is the lie that was whispered to Eve and from her to Adam and from them to us.

Aimlessly. This is a tricky one, because that which on the surface appears to be purposeful and right may be aimless in reality. Yet that which might look aimless may be the path God has for you, for me, for us.

Eden whispers and this sign screams: avoid rushing aimlessly. There is a better way, a way that you can return home to. Be still and know that I am God. I will be exalted.

Lest you think this is just something that can only be done in a place where a language is foreign to you, that too is a lie. Look today at the signs around you and as an act of spiritual discipline, come back and share one with us. I look forward to hearing what God says!