Mary DeMuth’s latest book, The Wall Around Your Heart, is about the walls we build to protect ourselves from relational hurts, especially from friendly fire. We can all say been there, done that!

In the end though, the walls meant to help lose their effectiveness and do more harm than good.

The use of the word “wall” got me thinking about another famous wall.

My first trip to China was in 1992. It was summer time and it was so hot I sweated in places I didn’t even knew I had. There is a saying in China that you’re not a real man or woman until you’ve stood on The Great Wall. One of the highlights of that summer was that I could claim to be a real woman. I got to stand on The Great Wall of China.

Over the years, I have fallen in love with The Great Wall. I lived in Beijing about ten years and part of my job involved orienting people to life in China. It never grew old to take people to The Great Wall. NEVER. 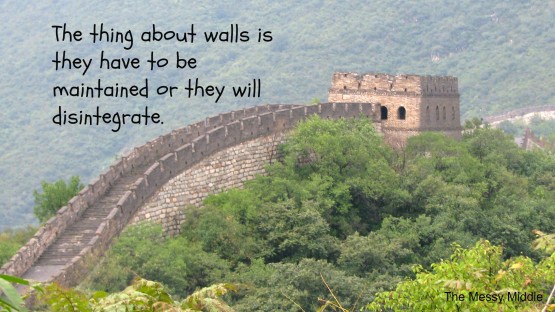 But here a few interesting facts I didn’t know about China’s great wall that help us understand our own walls.

1. You cannot see it from the moon. It’s great and all, but not that great. The same goes for our walls, they are great and need to be addressed, but they are not so great that God’s love and healing power isn’t greater.

2. This one is a game changer. There is not ONE wall. What we know as “The Great Wall” is a series of defensive structures built along China’s northern borders over a period from 200’s BC until the 1400’s. I know! And chances are, if you’ve got a wall around your heart, it probably isn’t one continuous wall. More likely, the wall around your heart started off with one incident, but it has been reinforced and added to along the way.

3. Let’s also not jump too quickly over the phrase “defensive structures.” What we now see as one of the great accomplishments of the Chinese, was actually built as an act of self-preservation. It was built to keep out northern “barbarian” tribes who kept coming down from the grasslands to raid Chinese farms and cities. Our walls are also defensive, and most likely in response to barbarians who are raiding your farms and cities. You were living your life, and someone else came to you, caused you pain, and your wall, at the time, was your best response.

4. The Great Wall is about 5,500 miles long but nowadays, most of it is in ruins. The thing about walls is they have to be maintained or they will disintegrate. For walls to remain effective, they must be cared for. How much time and effort do you expend caring for your walls? Are you tired?

5. As to effectiveness, The Great Wall may have been effective in specific eras (perhaps for decades or centuries at a time), but overall, not so much. The Mongols still came down and built the Yuan Dynasty and the Manchurians got in to build the Qing Dynasty. And truth be told about your wall’s effectiveness – it will be effective in seasons and certain situations, but in the end, it will fail you.

Unfortunately, too many of us have taken the Chinese saying about being a real man or woman and put our own twist on it. Saying that standing on the walls around are hearts is the way to be a real man or woman when it comes to protecting ourselves from hurt. Jesus reminds us through The Wall Around Your Heart that he has come not to build walls, but to break them down so that we can be set free.

This is the kind of book you can read alone or in a group and reap the benefits.

If you’ve been hurt and built a wall to protect yourself, I get it. Heck, there are 1.3 billion people in China who get it! Mary gets it too. She’ll walk you through the Lord’s prayer and you will see walls you haven’t known how to breach, come down.

If you’re wondering where you heard Mary’s name before, she’s the author of Not Marked — helping survivors of sexual abuse (and their friends). A version of this post first appeared in 31 Days of Open Hearted Living . P.S. The walls in she references in her book got started when she and her family were serving overseas. Anyone relate?

You don’t have to share your walls :) … but does this topic resonate with you?