I’ll be honest, I really hadn’t factored in the cost when I moved to China. But had I been asked if uncomfortable furniture was something I was willing to live with, I’m sure I would of snorted at you and said, “of course,” trying to hide my disdain for asking a question so below me, below the cause.

In all fairness, it wasn’t like the school where my teammate and I lived was holding out on us.  Comfortable furniture wasn’t a cultural value. There simply wasn’t furniture to buy.

Fast forward to the release of a crazy woman after four years of only having two Mao chairs whose springs had bring sprung for as long as Mao was no longer part of this world.  They sat next to each other, separated by the ubiquitous table.

Our school mentioned that they were going to buy us new furniture.

You know how teenage girls can go on and on about boys? Add 15 years and substitute “furniture” for “boys” and you get the picture of how obsessed we became with sitting somewhere comfortable.

As culturally appropriately as possible, we offered to help pick out the new couch (yes, yes, yes! A couch) and chairs. It’s hard to be gentle and subtle and helpful when you are frothing at the heart for something. We did try. We did. But looking back and knowing China better, we were as subtle as a two-year-old stuck on an idea. There is no way they were going to take us.

And the wooden couch and chairs that replaced Mao’s legacy didn’t seem like a hopeful representative of the new open and reformed world we were living in. After months of wondering and hoping and dreaming, we returned after the summer holiday to seating that was a lateral move in comfort at best.

Oh they had cushions. They did.

When I’d visit Beijing my colleague Becky lived in an apartment at the Friendship Hotel and owned a sofa that became for me the pinnacle of adulthood furniture. It has wooden legs (classy), was green and cream stripped (fashionable), and was not wooden or sprung (comfortable). I loved that sofa.

She left Beijing a few months before I moved to Beijing and sold me that couch. 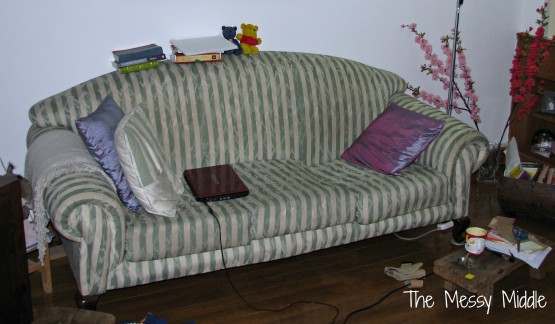 It was a modern day fairy tale where the girl got the prince charming of seating!

And if it were a fairy tale we’d end here.

But it’s not. Tomorrow we’ll continue the story of what a couch can mean.

Until then, how about sharing a fairytale-esque story from your life.