There’s a fine line between interest and obsession. I might have crossed it when it came to furniture in Chengdu (part one here).

Thankfully, The Divine also has a divine sense of humor, timing, and ability to teach. Have seeds, teach a lesson. Heal a man, talk about the deeper meaning. Take an interest obsession and show that idols can come in any form. Some you sit on.

I knew I was on the fast track to miserable-ville if I didn’t give up the desire to control and have the kind furniture I wanted. And so I did. Even though I had written about it to friends, families, and wider audiences asking for prayer, LOTS of prayer for the furniture, I had to come to a point of acceptance. It was slow, but I did.

Can you see then how sweet, how wonderful, how kind and generous and over flowing with furniture love I was when I became the owner of the most perfect Amy couch on the planet. I shared my rejoicing as far and wide as I’d shared my need and the people rejoiced.

The couch wasn’t just a couch. She was a daily reminder of answered prayer, of being given a fish instead of a stone, of being provided for in spite of an obsession.

But the years have gone by and like the Velveteen Rabbit, she has been rubbed real. I’ve mentioned back and neck problems before. The truth is that good furniture is probably more important for my back health than I wish. I’ve known for several years I need a new couch. I’m cheap, but more than that, how does one turn her back on the Prince Charming of Seating?

In the parables, we only hear the first part, the object lesson. What happens when the next crop doesn’t have the same result? Or the man who was healed falls and breaks his ankle? What happens when an answered prayer becomes old wine skin?

A friend left town and offered to give me her couch. Being in better shape than mine and a color that goes with current decorating, I accepted. When my friend was able to make the switch I already had plans (and really I’m a coward, I know her time was over, but I couldn’t face her leaving, my couch that is).

Street furniture is fairly common in China and I had a good idea where my couch would have been taken. On my way home I checked, sure enough, there she was. 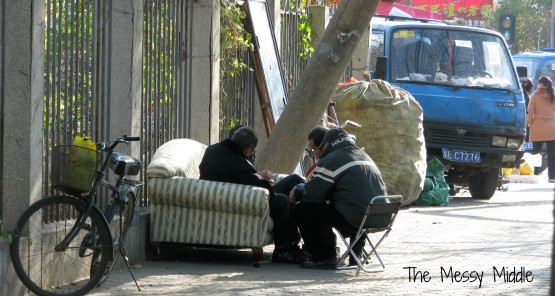 When did my life turn into street furniture?

How can I be on a well-known street, yet so disoriented in my own life?

I’ve become mildly obsessed (shocking, I know) with my former couch. I passed her twice on Saturday, once on Sunday, and then twice today. I’ve become the person who explains my behavior to an odd look I received this way, “That used to be my couch. I’m not taking pictures of the people, but of the furniture.” It’s hard to pull off in English, imagine it in Chinese.

I circled in on Saturday, trying to get a better view of the card games going on. Had my answer to prayer become the local gambling spot?! 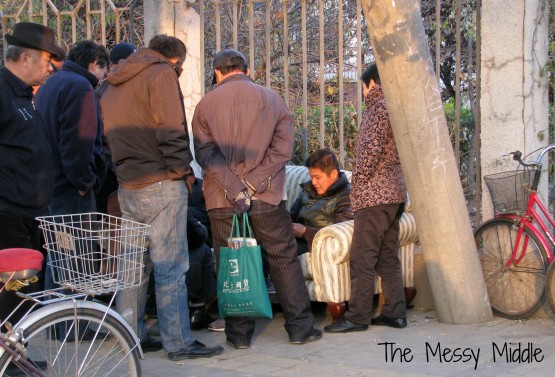 A friend texted, “I know you’re not really sad about your couch, it’s OK to be sad about your friend leaving. “ True, her departure is hard. But I’m actually sad about my couch too. My dream couch. My answered prayer. So classy, so fashionable, so comfortable. She’s street furniture.

Some answers are for a season.  Some things are not ours to keep. Sometimes we have to let go. 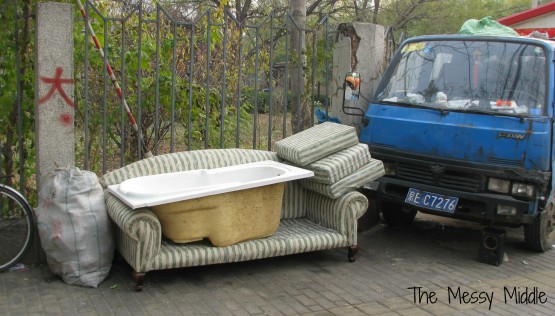