While I love quotes and am moved by words, the sad truth is that many don’t stick with me for the long haul. Thankfully when I read The Pilgrim’s Regress

by C.S. Lewis years ago in Sichuan, this passage jump off the pages and got stuck in my soul.

Be sure it is not for nothing that the Landlord has knit our hearts so closely to time and place – to one friend rather than another and one shire more that all the land.

Knit to one person more than another. One place more than another. Why did I love Chengdu so much when others mocked (and still mock) it? The cloudy skies, the lack of heat, are just a few things that made it hard for some to see the beauty she possesses. All I can say is I was knit to her. And yes, I fuss about Beijing air and the traffic, but again, the Landlord has seen fit to knit me here. I will always be a Coloradan no matter where I live. People chuckle and are a little unsure how to take my claim that the Broncos will be in heaven. How can they not be?! Likewise you have been knit to a place.

Why love Kentucky? I don’t know, but maybe you do. (I hope the answer isn’t “The Wildcats!”)

Have any interest in Budapest? The answers vary.

What’s great about Xi’an? I might only see the Warriors, but if you call Xi’an home, you know, deep in your bones the magic and mystery of Xi’an is more than mere stone men.

Recent events between the Chinese and Japanese have lead to stickers like these just to be clear where this car owner’s heart is knit. Do you see the red flag sticker? 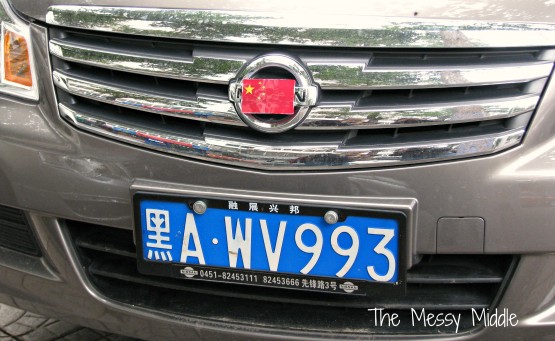 And it not to the country who made the car!

This morning I finished 1776

by David McCullough. I thought it was going to be about the war in general and was surprised to find it truly was about … 1776 (the book started in October 1775 and ended in January 1777). I knew the basics of the conflict but didn’t know how close the war was to being over before it began (or that it was only in the spring of 1776 that for many of the ‘rebels’/future Americans the war moved from being about being treated differently by the British to independence from them. You’re welcome for that piece of history.).

So why go on and on about a book about a war fought over 200 years ago? Because as an American I am knit to America. In this political season it’s easy to see what’s annoying about the process (ads, in case you are the one person who loves them and has no idea what I’m talking about). But knit one, pearl two, here’s part of my heart.

The Landlord is knit to all the world and I am not. However, he has made us complex enough to be knit to several places at once. I used to feel bad about not caring more for South America {or truth be told, even knowing which countries are in South America}.

But here is where the body of Christ comes in. I am knit to China and America. You may be knit to Canada, Brazil, and America. Do you see the overlap? Slowly, piece by piece, a patchwork quilt is made, whereby The Body is covered. The stitching is not always even and some pieces are more worn than others.

Like any good patchwork quilt, each piece tells a story and reminds us of an outfit, an event, a person. It grafts the past into the present and provides an infinitely more interesting story than any one item.

So, I am knit to Beijing, Chengdu, Broxburn, Lawrence, and Denver. Oh what a story those pieces tell! Thank you God for the richness of life and for grafting me into more than one place.

Which shire(s) has Landlord knit you to?