Dear Pastor, I’m not sure how to start this post.

Dear Pastors, were you surprised by the response to my letter? I was. Amy

Dear Readers, you did it. You posted this on Facebook and a movement was set in motion. Do you have any idea how many you have reached?! Thank you. Amy

Dear Jesus, What. Just. Happened?  You amaze me. Amy

Let me back up and show you a little bit of what’s gone on since Thursday morning when I hit send and “An open letters to pastors” moved from being in my head and heart to being part of the public dialogue.  I thought it might do slightly better than normal; it was written from a place of personal experience and a strong desire for things to be better, different, in the most God honoring “why do we settle for so little when we can have so much more” kind of way.

Prior to that post, the highest number of hits I’d gotten on one day was 172 –and that was thanks to a retweet from Patricia Heaton of Everybody Love Raymond— back in February. By mid-afternoon I was at 212 and thrilled to have broken my record because several people had said they’d post it on their Facebook page.  All told, on Thursday the total number of hits was 525 and I thought the wave had ridden itself out.

Friday morning I got up to teach and was stunned that there were 600 hits by 5:45 a.m. I returned from a full morning of teaching to over 2,000 hits (just on that day) and twelve comments from people I didn’t know and who shared parts of their stories. If you haven’t yet, go back and read through the comments, but first you might want to take your shoes off because it’s holy ground.

That’s more than 36,000 hits. But wait, there’s more! It was not only the total number of hits that floored me (literally, I had to lie down. I also ate an oatmeal cookie before noon, which was a gesture of celebration.). What humbled me was the global-ness of it. People in 109 different countries read this.  Can you even wrap your mind around that? As a shout out to the hours I spent as a kid playing Risk, people in Madagascar read the post! And the Cayman Islands aren’t just in John Grisham novels! Greenland sparked a conversation in the office today (it is, by the way, a part of Denmark). 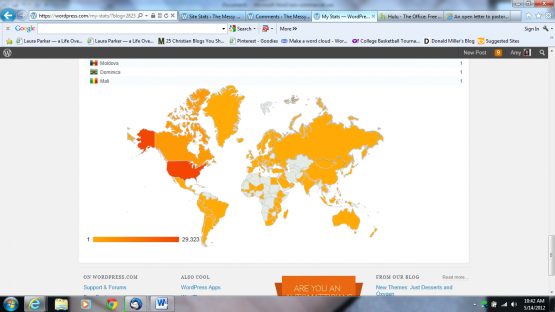 This is a screen shot of the different countries where the hits have occurred.

Sunday morning when I awoke and saw the total I started to cry, only the second time in this whole experience. It was a Paul moment  (yes, yes, I know that I compared myself to Mother Teresa two weeks ago and now am comparing myself to Paul, but work with me on this). Paul wrote letters and they circulated and those letters were used by God. I wrote a letter and it circulated and it was used by God. Paul, who called himself the greatest of sinners, still used by God. Me, a great sinner, still used by God. To God be the glory.Another very cool piece of this is told by my friend LeAnne. You can read about it here.

I have wondered over the past four days why this took off. Why not some other message? Three simple reminders have emerged:

On Saturday I was reading in Psalms (this was the day the numbers were continuing to grow and I kept hitting “refresh”) and the Lord so graciously reminded me: And if your wealth increases, don’t make it the center of your life. (62:10b) Point taken Lord, thank you for the reminder. Wednesday will find us here at The Messy Middle discussing the book 7: an experimental mutiny against excess by Jen Hatmaker. Come back and join in the discussion.

Until then, thanks for coming along for the ride.