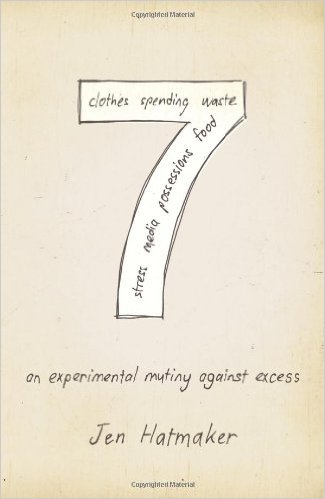 I’m participating in an on-line book group that is reading 7: An Experimental Mutiny Against Excess

by Jen Hatmaker. In it she fights the encroachment of consumerism on the human heart and behavior in seven areas: food, clothes, possessions, media, waste, spending and stress.

Her first month centered on food which is appropriate since the act of eating is what got us in this mess. No, that’s not quite fair. But it was the external manifestation of the lie that ‘you, too, can be like God’. Bite. And just like that even our relationship with something as life-giving as food got out of whack.

Jen limited herself to seven foods she ate for the entire month. I will admit, I got tired of listening to her whine about her experience (sorry, Jen, but I did). I wanted to say, “Lady, you’re only doing this for a month and you got to pick your foods! Move to China, have no language, be dumb enough not to bring a cook book or any cooking supplies in a pre-internet world and you will go a lot longer than one month eating fried apples and potatoes. Um. Hypothetically, I mean.”

But complaining about food is nothing new. Ask Moses.

The Israelites were willing to trade their freedom for variety.

And lest I cast the first stone (really, the second since I already cast one at Jen), as one living outside of her home culture, I can testify that food takes up a disproportionate amount of thoughts and conversations. Even for those of us who aren’t foodies. We can find comfort in the simplest things. Highlight of a dance party? Toast.

I find that our problem in the industrialized world with food can be boiled down (yup, I see it) to three main areas:

1. Variety. As the heirs of Israel, we crave variety as much as they did. If not more. We have such variety it can make your head spin and instead of being satisfied, once you start feeding the beast, she wants, you got it, MORE.

2. Nutritional Value. Michael Pollan’s In Defense of Food (which I highly recommend) makes the point that we have followed science down a dark alley and been mugged by her. Think you’re eating real bread? Think again. Real bread has about six ingredients, that stuff in your cupboard, twenty-eight. You do the math.

3. Size. Bigger is not always better. But in a land of excess we have lost all touch with what a “normal” serving size is. We do extremes well. We’ve got obesity and eating disorders down. What we can’t seem to hit is the middle.

And so it goes, a modern twist to one of the oldest problems a group of people have faced. Food no longer is just for sustaining life, it’s been turned into friendly fire on our souls.

In what ways has excess towards food crept into your cupboard, eating habits, or thoughts?